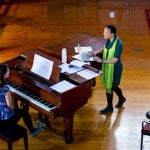 How could they not? The sold-out spectacular, which centers on a young man’s search for the extraordinary and his interactions with some mysterious traveling performers, got a boost from the Montreal-based circus troupe Les 7 Doigts de la Main, who added high-octane choreography inspired by the show’s original director, Broadway dance legend Bob Fosse.

Adding the circus element, Paulus told the Harvard Gazette in January, made the story originally written by Stephen Schwartz and Roger O. Hirson all the more powerful and added “bold physical expression.”

“And that was my interest, how to work on that, in a way to bring that potential viscerally forward. And part of that was the physical life of the production … [that] was so inextricably linked to Bob Fosse.”

A labor of love for Paulus, “Pippin” got its moves from choreographer Chet Walker, who, along with Paulus, strived to preserve the essence of the original Fosse footwork.

Last year, the A.R.T.’s productions of “The Gershwins’ Porgy and Bess” and “Once” took home 10 Tony Awards, including the prizes for best musical revival and best musical, respectively. Paulus was also nominated for best direction of “Porgy”; she had been previously nominated for “Hair” in 2009.

The Tony Awards will be broadcast live on CBS on June 9. For more information.