On the water and in the Air Force 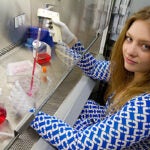 Embracing the magic of science

Crew star works toward Olympic berth, as she gets ready to enter military

When a recurring foot injury derailed Courtney Diekema’s Harvard soccer career almost as soon as it started, she did what savvy kids have been doing for millennia: She listened to her mother.

Diekema’s mother suggested she try rowing, a nonimpact sport in which her 6-foot, 1-inch height would be an asset.

Though she had never rowed before, Diekema fit right in. She was already an athlete, which was a big boost, and women’s rowing coach Liz O’Leary was used to training novices.

Diekema rapidly progressed, and in the spring of her junior year helped the women’s heavyweight eight boat to win the Ivy League championship. That sent her squad to the NCAA championships, where it placed ninth. Her performance earned Diekema a second team All-America designation.

“She’s wonderful,” O’Leary said. “She has a great sense of humor. She’s motivated and driven in a lot of ways. She has very high expectations of herself, which is why she’s where she is.”

Diekema is again looking forward to the Ivy League championship. She is hoping to help propel her team into the NCAAs and to push herself into the ranks of the nation’s elite women rowers. Two days after the NCAAs wrap up, Diekema will travel to Princeton, N.J., to compete for a spot on the U.S. under-23 team and a trip to the world championships in July. Her goal is to make the U.S. national team and ultimately go to the 2016 Summer Olympics in Rio.

To achieve that goal, the graduating senior will need the understanding of her new employer: Uncle Sam.

After participating in Air Force ROTC since her freshman year and serving as wing commander last fall, Diekema will join the Air Force as a second lieutenant upon graduation. She will join Air Force intelligence and undergo nine months of training. If she makes the under-23 team, she hopes to join the Air Force’s World Class Athlete Program, which would allow her to train full time in exchange for extending her service commitment from four to six years.

Diekema came to rowing late, but she came to the military early. Her grandfather was in military intelligence in the 1980s. She was planning to attend the Air Force Academy before she found out she had been accepted at Harvard.

“I like the idea of being part of something bigger than myself,” Diekema said.

Diekema’s athleticism has roots at home as well, albeit in the water rather than on it. Her parents were both swim coaches, her sister was an All-American swimmer at Calvin College, and her brother Jordan ’11 was a swimmer at Harvard.

Though Diekema, a government concentrator from Eliot House, is nervous about the coming transition, she feels it’s time to strike out from Harvard.

“I’m really excited and slightly terrified,” Diekema said. “I’m kind of glad to know what I’ll be doing for the next four years. Then I can make a decision to continue … or not.”

With classes, rowing, and ROTC, Diekema’s four years were busy. Her advice for incoming freshmen is to forget preconceived notions of what they want to do and just explore what Harvard has to offer.

“Try not to have any idea of what you think you want to study,” Diekema suggested. “Just be really open.”