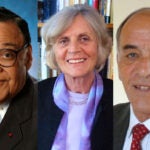 Having spent their careers focused on teaching and learning, and community building, Anne Harrington and her husband, John Durant, say they are excited about the opportunities that lie before them as the new master and co-master of Pforzheimer House.

“I am very pleased that Anne and John have agreed to take on these important roles. Anne and John are tremendous scholars, passionate not only about science, but also deeply committed to teaching and learning,” said Hammonds, the Barbara Gutmann Rosenkrantz Professor of the History of Science and of African and African American Studies. “But in addition to their scholarship, they are wonderful people committed to mentoring students and fostering community in Pforzheimer. The Houses are such an enriching part of the Harvard College experience, and having a family like Anne and John’s join the Pfoho family will help strengthen that tradition.”

Harrington is a professor of the history of science, as well as director of undergraduate studies for the department, while Durant is the MIT Museum director and an adjunct professor in MIT’s Science, Technology & Society Program.

“I am very excited,” Harrington said. “We spoke to a lot of masters as a part of this process, and through those discussions we got a sense of the real joy that this kind of position can bring and also what a wonderful opportunity for service this can be.”

They will take over as House masters in the fall, bringing with them their 8-year-old son, Jamie.

Harrington said having their young child living in the House atmosphere is part of what drew them to the masters’ roles.

“Jamie will be 9 when we take over as masters, so we decided as a family that if we were going to do it, this is the time to do it,” Harrington said. “We like the idea of him growing up in an aspirational community, one that is full of creativity, and talent and diversity.”

Durant added, “I see this as enormously enriching for the family. To be surrounded by smart, energized, talented young people, why would that not just be the greatest opportunity for a young child?”

“My career has also been marked by a sustained commitment to teaching, especially undergraduate teaching,” Harrington said.

In 2004, she was appointed to a five-year term as a Harvard College Professor, winning the Phi Beta Kappa Alpha Iota Prize for excellence in teaching.

Durant earned his B.A. in natural sciences and a Ph.D. in the history and philosophy of science from Queens’ College, Cambridge. In addition to his current day job as a museum director, Durant has worked to introduce science to a broader spectrum of people through the creation of the Cambridge Science Festival, and his efforts to launch similar festivals around the world.

“A lot of my career has been about community. I have spent a large part of my career in trying to engage the research community with the wider community outside of the university walls,” Durant said. “So there is something about community that I am drawn to, and now with Anne, I find myself drawn to a community within the university. I am hoping this will be exhilarating, I expect to learn a lot, I expect to be challenged and to also be stimulated immensely.”

The husband-and-wife team have also been teaching study abroad programs in England for the past five years. They will continue to do so this summer at the University of Cambridge with an eight-week program, titled “Science, Medicine, and Religion in an Age of Skepticism,” encompassing classroom study, extensive travel, and independent projects.

Durant and Harrington will be taking over for Nicholas and Erika Christakis, who have been House masters at Pforzheimer since 2009.

“I wish to extend to Nicholas and Erika Christakis my thanks for their service to our students during their time at Pforzheimer,” said Hammonds. “They have worked to foster a tight-knit House community and brought creativity and vibrancy to Pforzheimer. The College was fortunate to have them in these roles.”

Both Harrington and Durant said they look forward to fostering the tight-knit house community and traditions that currently exist at Pfoho, while introducing some new programs and events.

“There is a tremendous amount of enrichment and learning that happens just by virtue of living in a vibrant community with people with distinct talents,” Harrington said. “How can we leverage that into something greater than the sum of its parts? This is an opportunity and a challenge we take very seriously and one we are very much looking forward to.”