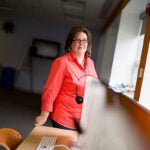 Two Harvard faculty members are among 27 scientists nationwide to be appointed as new investigators by the Howard Hughes Medical Institute (HHMI).

Adam Cohen, professor of chemistry and chemical biology and of physics, and Hopi Hoekstra, professor of organismic and evolutionary biology and molecular and cellular biology, were selected for their individual scientific excellence from more than 1,100 applicants from institutions throughout the United States. As part of the appointments, each will receive flexible support necessary to move their research in creative directions.

“HHMI has a very simple mission,” said its president, Robert Tjian. “We find the best original-thinking scientists and give them the resources to follow their instincts in discovering basic biological processes that may one day lead to better medical outcomes. This is a very talented group of scientists. And while we cannot predict where their research will take them, we’re eager to help them move science forward.”

HHMI will provide each investigator with his or her full salary, benefits, and a research budget over their initial five-year appointment. The institute will also cover other expenses, including research space and the purchase of critical equipment. The appointments may be renewed for additional five-year terms, each contingent on a successful scientific review.

Jeremy Bloxham, the Faculty of Arts and Sciences dean of science, hailed the selection of Hoekstra and Cohen.

“Hopi’s and Adam’s appointments speak to the exceptional quality of the science performed in these labs,” Bloxham said. “As HHMI investigators, Hopi and Adam will have the freedom to undertake novel and creative lines of inquiry. I look forward to the exciting work that will undoubtedly emerge from their labs as a result of this freedom over the coming years.”

Going forward, Hoekstra said she plans to use the award to focus her lab’s efforts on investigating the link between genes and behavioral variation.

“In my mind, this is a next great frontier in biology,” she said. “This award will give us the freedom to follow our research where it leads us, to move quickly, and to take risks.”

Given the current atmosphere for research funding, she added, being named an HHMI investigator is particularly important, as it will free her up to focus on research.

“Federal funding is more and more difficult to secure, so many researchers are spending more and more time writing grant proposals and less and less time doing research,” she said. “Also complicating things is the fact that our work is highly interdisciplinary, which means our research proposals often fall between different funding agencies.

“This award will allow us to pursue our most novel and innovative work while maintaining our strength in integrating approaches from across traditional disciplinary boundaries,” she added. “The support of the HHMI will mean I can focus more on the part of my job I love best: thinking creatively about science.”

Cohen’s proposal to the HHMI outlined a project whose goal is to take an instantaneous snapshot of the activity state — firing or not firing — of every neuron in the brain of a mouse. The challenge, he said, is that a mouse’s brain consists of about 100 million neurons.

“This project has some technical challenges, but I think we can succeed,” Cohen said. “The financial security provided by HHMI is great.  Not only does it largely free me from the tedium and terror of applying for federal funds, but it also allows me to adopt a more long-term view of my research. With HHMI support, it becomes possible to tackle really big challenges that might take a few years to yield results.”

Of equal importance, Cohen said, is the fact that being an HHMI investigator gives researchers access to a nationwide community of exceptional colleagues, all of whom are working at the cutting edge of their respective fields.

“Funding and support are great, but many people have told me that HHMI also provides a unique community,” Cohen said. “They sponsor annual meetings where people at the very forefront of all areas of biological and biomedical research describe their ongoing projects and future dreams.  I think it will be incredibly inspiring to participate in these discussions.”