Mourning that vexes the future 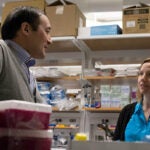 People who suffer from complicated grief have trouble looking ahead, researchers say

The loss of a loved one is an especially painful and disruptive event. A study by Harvard researchers shows that, for a small number of people, the sorrow that comes with the death of a spouse or partner can lead to problems not only in remembering the past, but also in imagining the future.

As described in a paper published last month in Clinical Psychological Science, Professor of Psychology Richard McNally and clinical psychology graduate student Don Robinaugh found that while people suffering from complicated grief — a syndrome marked by intense, debilitating emotional distress and yearning for a lost loved one — had difficulty envisioning specific future events, those problems disappeared when they were asked to imagine an alternate future that included their lost loved one.

“When someone loses a spouse, they lose not just the person they spend every day with, but the person they’re planning on spending the next 40 years or more with. So they’re losing all those events they imagined in their future — the birth of their first grandchild, the day they celebrate their retirement together, or their 50th wedding anniversary,” Robinaugh said.

“Our sense is that people with complicated grief continue to imagine those events. They continue to picture what their life would have been, and they deeply yearn for that counterfactual future,” he said. “It’s a future that’s no longer possible. But it’s one they still strongly, strongly desire, so when we ask them to imagine these events, they are readily able to do so. In contrast, they have a much more difficult time when we ask them to imagine their future without the deceased.”

To get at questions of how complicated grief might affect people’s ability to recall the past and envision what’s to come, Robinaugh and McNally recruited nearly three dozen volunteers, all of whom had lost a spouse or partner in the last one to three years, and identified more than a dozen who were suffering from complicated grief.

All the study participants were then asked them to perform what researchers call an “autobiographical memory task.”

Developed in the 1980s as a way to probe how conditions such as depression and post-traumatic stress disorder affect memory, the test asks subjects to recall specific memories based on certain keywords. As an example, Robinaugh said, researchers might start with the keyword “happy” and ask people to recall a time when they felt that way.

“People who suffer from depression or post-traumatic stress disorder have a difficult time recalling specific memories on this task,” Robinaugh said. “If we ask them to describe a specific time when they felt happy, they may say they’re happy when they watch TV, or they were happy last year, as opposed to describing a specific event like the day their daughter was born, or when their son graduated high school.”

When researchers at the University of Cambridge administered the test to patients with complicated grief, they uncovered a surprising result. When asked for memories from their own lives, people suffering from complicated grief struggled, but when asked to recall events from the life of their lost loved one, they performed significantly better.

“We wanted to see if those findings would extend to how people thought about the future. One of the major clinical features of complicated grief is a sense the future is hopeless or empty, suggesting they may have difficulty imaging their future,” Robinaugh said. “In addition, there has been a great deal of work by professors Daniel Schacter, Randy Buckner, and others demonstrating that people’s ability to think about the past is very closely related to their ability to think about the future.”

“When imagining events that included their loved one, patients typically described landmark life events,” Robinaugh said. “They would say things like, we would be happy when our first child is born, when we’re celebrating the day I retire, or when we finally buy our dream house. For people with complicated grief, these events with their loved ones were much easier to imagine than were events that could at this point realistically occur in their future.”

Researchers also tested patients’ ability to recall the past by asking them to relate a memory in which a lost loved one was present, and another in which he or she was not. As in previous studies, Robinaugh said, those suffering from complicated grief performed better when recalling an incident that included the deceased.

“We are just scratching the surface in terms of our understanding of this deficit in the ability to imagine the future,” Robinaugh said, “but we hope that helping people with complicated grief to better imagine their future will have some therapeutic benefit.

“Even years after the loss, people with complicated grief maintain an identity that’s very closely entwined with the deceased,” he said. “Their life becomes very constricted. They don’t want to go out because they worry something might remind them of the loss and consequently trigger a lot of painful emotion. They often don’t want to become emotional in front of other people, so they stop seeing friends and family members.

“This process of imagining the future can open things up,” he added. “It allows them to think about what their life might look like, and the things that might, at some point, make them happy, or that might give them a sense of meaning and purpose.”