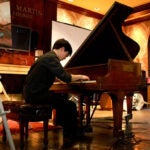 Tsitsi Jaji, the Mary I. Bunting Institute Fellow at Radcliffe, is fascinated by what songs can teach literary specialists about how to read poetry. She calls art songs — vocal compositions typically arranged for one voice with piano accompaniment — “the perfect texts to explore the dynamic relationship between music and poetry in my new Radcliffe project.”

That project, titled “Classic Black: Art Songs and Poetry in the Black Atlantic,” examines the work of 19th- and 20th-century composers of African descent from Britain, Nigeria, South Africa, and the United States who set poetry to music, and how things like harmony, cadence, tempo, and rhythm alter the meaning of the words.

Jaji will sing the art songs she analyzes as poetic commentaries during a presentation today at 4 p.m. in the Radcliffe Gymnasium. For the classically trained pianist, singing instead of sitting at the keyboard helped her learn not only how hard the songs are to sing but also to “pay attention to the vowels … it’s a different perspective on the actual substance and sound and diction of language.” (Cansu Çolakoğlu ’16, one of Jaji’s two Radcliffe researchers, will accompany her on the piano. Her second assistant, Adela Kim ’16, helped her transcribe the music she worked with into Sibelius, the computer musical notation program.)

In addition to performing musical works by Ignatius Sancho, Samuel Coleridge-Taylor, and Shirley Graham Du Bois, whose compositions she found next door to her office in Radcliffe’s Arthur and Elizabeth Schlesinger Library on the History of Women in America, Jaji set her own work to a poem titled “Jonah” by Lucille Clifton, the former poet laureate of Maryland. Jaji, now an assistant professor of English at the University of Pennsylvania, called Clifton “an amazing master of packing immense punch into a handful of lines.”

The biblical reference in “Jonah” evokes “a body of oral culture, including spirituals and black vernacular preaching styles,” said Jaji, who used the melody from one of her own favorite spirituals, “Sometimes I Feel Like a Motherless Child,” in the piano part of her composition to evoke something much darker.

“The use of that melody allows me to show that I see the reference to Jonah’s whale as actually referring to the belly of a slave ship,” she said, “rather than the biblical leviathan.”

Jaji added: “The last few lines of the song are quiet, as if the warning to the brothers is delivered in hushed tones, and then there is a sudden crescendo on the final word ‘ocean.’ I can only imagine the terror that kidnapped men, women, and children from the interior in West Africa must have felt when the saw and heard the ocean for the first time on the eve of their transport in the Middle Passage … and how, retrospectively, that terror must have grown even more acute.”

While Jaji said she could have chosen to set a work by Walt Whitman to music, like she has done in the past, using the words of the African-American Clifton allowed her to claim an artistic lineage that has become vital to her.

“That for me is a pan-African move, because I could just claim relationship to my Shona identity from Zimbabwe, but as a person who has lived in the United States now for 20 years, I am a black American and this is part of that larger black Atlantic tradition that I see myself very much needing, and celebrating my connection to.”

Jaji said another fellow at Radcliffe, visual artist Zoe Beloff, who tries to make “esoteric knowledge available to everyone,” influenced her work.

To Jaji, “Performing these songs is kind of the same thing. … If you have access to privilege, which surely at Harvard we do, what can you do to open up that privilege to a wider sector of your world?”

Born in Zimbabwe, Jaji left Africa to attend Oberlin, where she studied both comparative literature and piano performance. After college she considered an advanced degree in music, but her interest in comparative literature (and a better financial package) prompted her to pursue a Ph.D. in that subject at Cornell University.

In upstate New York, she merged both worlds, studying literature, but also keeping up with her music. Her dissertation blended the two, examining the influence of black American music on the expressive cultures of Ghana, South Africa, and Senegal.

She wrote about “music in literature and film, and the way that black American experience was … articulating resistance to white supremacy.”

Her research became the basis for her forthcoming book from Oxford University Press, “Africa in Stereo: Music, Modernism and pan-African Solidarity,” which she finished at Radcliffe earlier this year. Her work on the book led her to her current project. It included a look at the influence of music on the first Pan-African national conference in 1900 in London. There, as part of the program, Afro-British composer Coleridge-Taylor set a poem to music — “A Corn Song” by African-American poet and Ohio native Paul Laurence Dunbar.

“Coleridge-Taylor’s harmonic and rhythmic choices shifted the way that Dunbar’s poetry registered meaning, affect, and imagery for me,” Jaji wrote in April. “Here was a composer teaching me to read differently.”