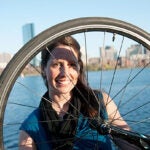 Her wheels are always turning

Last summer, Maia Fedyszyn learned that the nameless, faceless bureaucrats who run the federal Medicaid program aren’t so invisible after all. What’s more, they care deeply about the program and its impact on the public.

Fedyszyn, who is receiving a master’s of science in public health from the Harvard School of Public Health (HSPH), spent the summer at the Centers for Medicare and Medicaid Services. There, she developed a passion for health care policy, worked to develop Medicaid regulations, and reviewed some of the 500 public comments on drafted rules.

The experience, Fedyszyn said, exposed her to the “nitty-gritty of policy work,” but also gave her an appreciation for the dedication of workers behind the scenes.

“They read every single one” of the comments, “respond to some directly, and make changes based on them,” Fedyszyn said. “They’re really, really dedicated to this. … It was great to know that this is how the system works.”

If Fedyszyn has her way, she’ll be working in that system after graduation, helping to fashion health care policy.

That’s something John McDonough has no doubt will happen.

“She’s got a real passion for health care policy and has taken advantage of every opportunity to work directly in a health policy setting,” said McDonough, professor of the practice of public health and director of the HSPH Center for Public Health Leadership. “She has a terrific future in health policy.”

Fedyszyn plunged into health care policy as a Dartmouth College undergraduate. She studied retirement savings and health care, developed policy recommendations, and delivered them to the New Hampshire Legislature.

“I was drawn to doing something that would make an impact in the world,” Fedyszyn said. “We all need quality, affordable health care.”

As a junior, she interned at Boston Health Care for the Homeless, which provides a place to recover from medical issues. She arranged post-discharge support such as housing and substance-abuse programs.

She recalled one man, around 40, with a broken leg. Though he was determined to beat his alcohol problem and was doing well after a monthlong stay, it wasn’t long before he began drinking again and returned to the program. After she graduated from Dartmouth in 2007, Fedyszyn joined AmeriCorps, returned to Boston Health Care for the Homeless, and found out that the man had died on the street.

“You form these connections with people. Seeing them struggle, you want to provide resources to help them get better,” Fedyszyn said. “It was really heartbreaking.”

Fedyszyn said she learned a lot at HSPH, in class and out. She praised the faculty and classmates who helped her grow and contribute. In the spring of 2012, Fedyszyn was one of two students who drafted the case for HSPH’s first spring exercise.

That exercise, led by McDonough, had student teams focus on specific health policy problems, do research, and develop policy recommendations. The teams’ work was judged by experts at the School, and the winning recommendations were presented to the Massachusetts Legislature.

“It’s been a resounding success,” Fedyszyn said, “a great experience for everyone involved.”