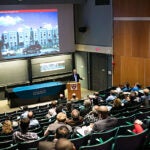 How do you make Boston bike-safe? First you find out where it’s unsafe.

Answers to that and other key questions would provide the foundation for effective policy, a team of four Harvard School of Public Health (HSPH) students told Boston City Councilor Ayanna Pressley on Wednesday.

The four — Aaron Pervin, Temitope Olukowi, Claire Albert, and Marie McIntee —  were the winners of an annual spring exercise at HSPH in which student teams examine a health policy issue and devise recommendations on how to address it. Professor of Health Policy David Hemenway and doctoral student Dahianna Lopez advised the team.

In their presentation, the students told Pressley that dealing with Boston’s bike-safety problem — made apparent by a string of fatal accidents last year — is especially difficult because information on ridership, common routes, and even accidents is scattered among reports by the Boston Police Department, ambulance teams, emergency rooms, and a variety of city departments.

The team proposed coupling a movable four-camera system with advanced software to gather information for analysis by a private company or a city staffer. The cameras, used for research only, could be posted at an intersection for a short period of time and then moved to another part of the city.

The cameras would reveal not only whether cyclists use a particular street or intersection, but also the volume of bike traffic, accident severity, and details on riders’ age and sex.  That information would go into a centralized database, along with bicycle-related reports from Boston police and other city agencies. Officials would better understand how bicyclists use city streets and be able to determine where bike lanes or other interventions are needed.

“We’re talking about a fundamental shift in how we collect data, use data, and share data,” McIntee said. “Without good data, no good decisions are made.”

Boston has made a major push in recent years to become more bicycle-friendly. In April 2011, Mayor Thomas M. Menino signed an agreement with Alta Bicycle Share, creating the Hubway bicycle-sharing program, which lets residents and visitors buy passes to use bicycles from stations located across the city. Last year it logged more than half a million trips.

“An increase in bicycle ridership brings an increased need for measures to ensure the safety of cyclists,” Pressley said. “We want Boston to be the safest bicycling city.”

City Councilor Felix Arroyo, who attended the first part of the presentation, backed that goal.

“As a city, I think we’ve gotten exponentially better than just a few years ago, but there is much more we can do,” said Arroyo, who last month announced a run to succeed Menino as mayor.

Capt. Jack Danilecki of the Boston police, former commander of the tactical bicycle unit, said that five cyclists were killed in Boston last year. Police are taking an initial step to address the problem by issuing reminders — in the form of $20 tickets — to cyclists who run red lights and stop signs that they are legally bound to obey the rules of the road.

The deaths “are unacceptable, we’re trying to figure out how to make bicycling safer in the city,” said Danilecki, who visited HSPH to brief students during the spring exercise.

The students’ data-centered approach reflects the city’s own recognition of the need to understand a problem before designing solutions. Boston police have collaborated with HSPH on a report on bicycle safety that is nearing completion, Danilecki said.

This was the second year for HSPH’s spring exercise. Modeled on a similar program at the Harvard Kennedy School, it was launched last year under the leadership of John McDonough, director of the Center for Public Health Leadership and a professor of the practice of public health. Fawn Phelps, the center’s assistant director, described the contest for Pressley during Wednesday’s event, saying that the 50 students who participated listened to talks by nearly 40 experts on the issue before setting to work on policy recommendations.

A recurring theme among the experts was the inadequacy of data, Olukowi said. While a bicycle lane on Commonwealth Avenue may seem to make sense, it’s impossible to know without data. Perhaps bicycle lanes in retail areas would drive business to those stores, as some claim, but there’s no hard evidence to support that. Olukowi likened the situation to a physician writing a prescription for high blood pressure medicine without making sure that hypertension is the patient’s problem.

a standard-setter on bicycle safety. The map had different colored dots showing not just accident sites, but also whether the cyclist, automobile, or pedestrian was at fault.

But San Francisco’s map lacks volume data, Pervin said, which could provide a better sense of how dangerous an area is. For example, six accidents at an intersection used by 1,000 cyclists is likely more dangerous than one used by 5,000 cyclists. Volume data, enabled by the advanced cameras, would allow Boston to leapfrog San Francisco with respect to safety, Pervin said.

“Massachusetts is leading the way with health reform and, with the proper injury surveillance database, Boston could be a leader in bicycle safety,” Pervin said.

Questioned by Pressley, Albert said the cameras cost about $3,000 each and there would be additional cost to analyze video. A private service would cost $15 to $20 an hour, but the students recommended the city hire a single person to do the review.

Pressley, who described herself as “passionate” about the issue because of its health ramifications, called the students’ proposal “comprehensive” and “thoughtful,” and said it was “the beginning of a longer conversation.”

Anne Lusk, a research scientist in HSPH’s Nutrition Department whose work focuses on bicycling and its health benefits, said the recommendations are a move to make cycling part of the city’s fabric, with not only bicycle lanes for people who commute to work, but also extra-wide lanes to enable side-by-side social riding and more convenient storage at apartments and stores. Bicycling is also potentially an economic equalizer, she said, providing inexpensive transportation for just about anyone.

“It’s building it into your daily life, but making it pleasant, so that joy is there,” Lusk said. “The bike is such an easy element. It’s been around so long. Everyone can ride.”