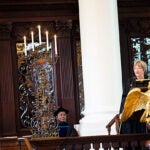 With academic interests that range from algebraic geometry to the intellectual and political history of China to human evolutionary genetics, it would seem that the five faculty members awarded Harvard College Professorships might have little in common.

But although their scholarly interests are varied, there is one trait they all share — a dedication to undergraduate education and a reputation as some of the best teachers in Harvard’s classrooms.

The five, Higgins Professor of Mathematics Joseph D. Harris, Professor of Government Steven R. Levitsky, Walter C. Klein Professor of Chinese History and Acting Director of the Asia Center Michael Puett, Professor of History of Art and Architecture and Chair of the Committee on Degrees in the History of American Civilizations Jennifer L. Roberts, and Professor of Human Evolutionary Biology Maryellen Ruvolo, were named to the prestigious positions earlier this month by Faculty of Arts and Sciences (FAS) Dean Michael D. Smith.

“It is a pleasure to recognize Joe Harris, Steven Levitsky, Michael Puett, Jennifer Roberts, and Maryellen Ruvolo for their dedication and innovation in the classroom,” Smith said. “In addition to being world-class researchers, each brings an energy and passion to the classroom that is infectious among their colleagues and inspirational to their students. They are prime examples of the type of educators that make the Harvard experience special for our students.”

The Harvard College Professorships are five-year appointments, begun in 1997 through a gift of John and Frances Loeb. They provide faculty with extra support for research or scholarly activities and a semester of paid leave or a summer salary.

Each recipient said he or she was honored to receive the recognition, and all said their time in Harvard’s classrooms has been as much about learning as teaching.

Although he believes that “teaching is its own reward,” Harris said that it was “great, and totally unexpected” to be awarded a professorship.

“It’s wonderful to feel that what I do is recognized and appreciated,” he said. “If I do have an approach to teaching, it’s the absence of any overarching philosophy. To me, the most important thing is to tailor the level and content to the students: what background they have, what ideas they’re already familiar with and how to build on those.”

“I’ve been involved, in the last few years, in a number of summer research projects with students through such programs, and this will help me continue and expand these activities,” he said.

While he said he was honored to receive the recognition, Levitsky believes there are many Harvard faculty members worthy of such acknowledgment.

“There are many, many exceptional professors here, not just five, and students know how to find them,” he said. “I like teaching — I work very hard at it, and I get a lot out of it, in part, because I’m a ham, and so I like getting up in front of big groups and lecturing. But I also really enjoy interacting with undergraduates.”

Although he hasn’t yet considered how he’ll make use of the added support that comes with the Harvard College Professorship, Levitsky emphasized that it can be as much of a learning experience for faculty as it is for students.

“Good teaching takes time, and it takes time for a couple reasons,” he said. “First, it’s very important to know your students — to know what’s going on inside a student’s head, how they’re thinking and what motivates them. That inevitably means spending time with students.”

To that end, Levitsky said, he has lunch with undergrads in one of Harvard’s Houses at least once a week, and holds office hours for as many as six hours per week — all in an effort, he said, “to get students to talk to me.”

“The other part — which I think is critical to teaching — is translating what we know as scholars into language that students not only understand but are interested in,” he said. “What we do as scholars is often highly complicated. It’s possible, but it takes a great deal of work to translate it into something that’s meaningful to a 19-year-old who is not going to get a Ph.D. in political science.”

Like many other faculty members, Puett said the greatest reward he gets from spending time in the classroom doesn’t come from teaching, but learning.

“I believe that the learning process should be a fundamentally transformative one, for both students and professors alike,” he said. “The questions posed, the material analyzed, and the discussions that develop in the classroom should ideally be such that they challenge the assumptions of the participants and help them to think in new ways.”

While he aims is to introduce students to new concepts and ideas, Puett said his goal, ultimately, is to widen student’s horizons, and help them understand that the ideas they carry into the classroom may not be held by others.

“I hope to give students a sense of the implications of different ways of relating to other people and to the world, a more open attitude toward different visions than the ones they find most natural, and a greater willingness to explore other approaches and views,” he said. “Views that students may have taken for granted before the course will hopefully come to seem more complex and problematic, and views that they may not have even heard of before will hopefully come to be taken seriously.”

While the rise of new digital tools has certainly opened new avenues for teaching and learning, Roberts said it has had an interesting side effect: a renewed focus on what she calls “offline” pedagogy.

“The revolution in online teaching has certainly opened up new opportunities for experimentation, but in doing so it has simultaneously redirected our attention toward the physical classroom,” she said. “Teaching in real time and real space is no longer to be understood as the default mode but rather as a strategy that has specific kinds of function and value. We are now able to explore teaching and learning as live, engaged, social experiences that need to be cultivated as such.”

To demonstrate how genetics is relevant to her students’ lives, Ruvolo took an unusual approach: She had students in her Life Sciences 1B class, “Genetics, Genomics, and Evolution,” sequence parts of their own DNA and search for genetic markers associated with traits such as athletic endurance, sleep/wake cycles, and the ability to digest lactose.

“It really brought the subject matter home to students in concrete terms and was a great forum for highlighting the ethical implications of genetic testing,” Ruvolo said. “I believe it is vitally important to have students look hard at the evidence for scientific conclusions, and, if that evidence is tentative, to get them to appreciate conflicting data and understand why the jury is still out. It’s even better to give students the data and have them draw conclusions for themselves whenever possible.”

Ruvolo teaches Life Sciences 1B with her colleagues Professors Hopi Hoekstra, Kevin Eggan, and Pardis Sabeti, and recognizes them as members of a dynamic teaching team. Although each of them has made wide use of technology like clickers to instantly test students during lectures, or to collect information about preconceptions that need to be overturned, Ruvolo said her favorite moments still come through face-to-face classroom interaction.

“I particularly cherish those times when I can sense that students ‘get it’ by their collective reaction,” she said. “Their shared excitement crackles in the air, and it sets up a great teachable moment for the next part of the lecture.

“On a few occasions, students have literally jumped out of their seats and run up to the front of the room after lecture to ask more about a topic that turned them on,” she added. “This is an irreplaceable part of a live lecture course for me. My goal is to create an electrifying intellectual flash for at least one student in every lecture.”