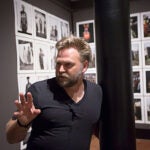 ‘Age of Wonder’ author covers past and future of scientific biography

Richard Holmes, whose critically acclaimed “The Age of Wonder” explored the intersection of science and the arts in the late 18th and early 19th centuries, discussed the role of biography in shaping popular understanding of scientists and their work Tuesday at Radcliffe Gymnasium.

“Can biography and science speak to each other?” he asked to launch his 75-minute talk, “The Scientist Within.” Holmes said they can, even though “biography is literary, subjective, historical, and backward-looking,” while “science is forward-looking” and objective.

The image of the scientist in the popular imagination was largely created around the Romantic notion of a singular genius experiencing a “eureka” moment of discovery, said Holmes, stressing the point by holding a print of the astronomer John Herschel next to a picture of Albert Einstein. With their strikingly similar unkempt hair and intense gazes, there is “something extraordinary about how close these images are,” he said.

Biography can help challenge and deepen such notions by illuminating not just the formation of an individual scientist but also the painstaking scientific process, he said, citing Walter Isaacson’s “Einstein” and “Steve Jobs” and Dava Sobel’s “Longitude,” as successes.

Holmes traced the roots of scientific biography to the 17th century. Samuel Johnson, the subject of one of the most famous biographies in history, himself wrote a pioneering work: “The Life of Herman Boerhaave” (1739). The book focused on formative events in its subject’s childhood, as did William Stukeley’s 1752 biography of Isaac Newton. Holmes quoted Stukeley: “Every reader burns with a desire to know the primordia,” the beginnings of Newton’s epic engagement with science. It was Stukeley’s biography, Holmes said, that first popularized the story of how a falling apple served as Newton’s epiphany about the workings of gravity.

As he did in “The Age of Wonder,” which was named the best nonfiction book of 2009 by Time, Holmes stressed the close interaction between scientific discovery and artistic endeavor in the Romantic age.

Pioneering astronomical work by Sir William Herschel (father of John) helped inspire the music and poetry of his age — the work of Keats, for one. For Romantic poets such as Keats, science was about “eureka” moments, when nature’s wonders were revealed. Of course, as Holmes pointed out, Herschel had no such moment, but confirmed his observations through careful research and the generous help of others, such as his brilliant sister, the astronomer Caroline Herschel.

Equally taken with astronomy, said Holmes, was composer Joseph Haydn, who looked through Herschel’s famous telescopes shortly before beginning the composition of his oratorio “The Creation,” in 1796, and drew inspiration from a conversation with Caroline Herschel.

Holmes finished with an emphasis on three emerging challenges in scientific biography: first, a much deeper look at the contributions of women (he cited Rosalind Franklin, who worked on discovering DNA, as a prime example of neglect); second, the need to better convey the collaborative nature of scientific discovery; and finally, educating and inspiring young people to consider careers in science.