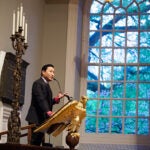 ‘Gangnam Style’ by the Yard

Dupont began working in Papua New Guinea in 2004, spending time with the gangs of Port Moresby, the nation’s capital and one of the world’s most crime-ridden cities.

More recently, in 2011, Dupont traveled around the country, documenting a culture in transition as a Robert Gardner Fellow in Photography from Harvard’s Peabody Museum of Archaeology and Ethnology. The fellowship, which supports a documentary photographer in an in-depth endeavor examining “the human condition anywhere in the world,” was created by documentarian and author Gardner in 2007.

Dupont’s project examines the impact of globalism and the creep of Western lifestyles into a nation where traditional ways have long held sway.

Dupont has long been interested in the clash of cultures. Living in Australia, he was first drawn to Papua New Guinea after two friends, a filmmaker and a photojournalist, traveled there. During his fellowship year, he focused on three areas: Port Moresby, a melting pot of the nation’s many tribes, rife with modern urban problems including crime, slums, unemployment, and AIDS; the fishing communities along the Sepik River, the country’s longest; and the tribes of the remote highlands, whose rugged terrain and isolated valleys still provide some insulation from the outside world. He took thousands of images using five different photographic formats, including Polaroid film and large-format, 4-by-5 cameras.

Dupont’s work is on display through September at the Peabody Museum. The exhibition features diaries and large images that take the viewer to a country in flux, and also chronicle daily life — mothers sitting with their children, people dashing for shelter from a sudden downpour, a rugby team praying together before a match.

The images hold echoes of Australia’s influence on the lowlands and the highlands’ eroding traditions. Dupont, who will participate in an online “webinar” on his work on June 27, found fertile ground at Sing-Sings, cultural events created by colonial authorities as a way to get highland tribes to interact peacefully. The events, which Dupont described as “tribal Woodstocks,” draw thousands to observe and participate in tribal dance, singing, and other competitions.

To document the Sing-Sings, Dupont set up a portable portrait booth, using black or white sheets as backgrounds to isolate the subjects. But instead of using physical supports to hold the backdrop, Dupont had bystanders hold up the sheet. He then pulled back the frame to include the helpers around the edges. Where a portrait against a neutral background might be taken anywhere in the world, this technique allowed him to incorporate the flavor of the setting within the images.

The Sing-Sing pictures show the subtle — and sometimes not so subtle — intrusion of Western influence into what is intended to be a traditional tribal display: one woman wears a white brassiere with otherwise traditional garb, while a man wears a drum made from a large plastic container on a sling around his neck.

Dupont said the Sing-Sings have visibly changed since his first visit to the country in 2004. In addition to the Western items working their way into people’s dress, advertising is everywhere, with Digicel, the country’s leading mobile phone carrier, surpassing even Coca-Cola.

To get a sense of how people dress while away from the competitions, Dupont visited a traditional tribal area in the southern highlands. But a nearby liquid propane plant had brought in roads and infrastructure and moved people off their land. While some older people maintained traditional dress, most of the younger people wore Western clothes, adorned with a lone piece of traditional jewelry.

“It’s the death of their culture. How long will it be before it’s completely gone?” Dupont asked.

He may be around to find out. Though he has already done a lot of work there, the intersection of globalization and traditional culture is a rich subject area, and the diversity in Papua New Guinea means there’s still plenty to do.

“New Guinea has really gotten into my blood,” Dupont said. “I feel as if I’ve only scratched the surface.”