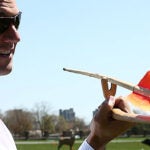 Designers of affordable housing are thinking green these days, looking to take better advantage of the sun, creating green spaces and rooftop gardens, and deploying an array of energy-saving features.

The sector is part of the vibrant activity in U.S. cities, in contrast to stagnation in Washington, D.C., said Jonathan Rose, whose development firm, Jonathan Rose Companies, emphasizes sustainable designs.

The issue is especially important amid population growth in the developing world, where the slums that often surround cities present enormous challenges to ensure populations are safe and healthy, particularly in the face of climate change.

“Climate change is going to bring a lot more uncertainty into the human world,” Rose said.

Rose made his comments Tuesday in a talk at the Science Center titled “The Well-Tempered City.” The lecture was part of the Harvard University Center for the Environment’s “Future of Energy” lecture series. The center’s director, Daniel Schrag, Sturgis Hooper Professor of Geology and a professor of environmental science and engineering, introduced the developer.

Rose outlined several areas of tension in the creation of healthy cities. Diversity is key, as is clustering, which created such engines of growth as Silicon Valley and Wall Street. An engaged democracy is important; so is strong leadership. A connection to the global community is needed, along with independence.

American cities have experienced something of a renaissance since the early 1990s. At that time, cities were becoming increasingly abandoned as people fled to the suburbs. Since then, however, some 70 percent of building permits have been in urban centers rather than outlying areas. Two demographic bulges are behind the change, Rose said. The first is that young people want to live in cities — where the action is — not suburbs. The second is that many retiring baby boomers are selling the large family home and moving to the city, to be near children and grandchildren.

Healthy, resilient cities need to tend their economic, social, technical, and natural environments, Rose said. Affordable housing is sometimes overlooked, but poor children trapped in unsafe housing are at risk for a variety of social ills, such as poor performance in school, drug use, and gang membership. Healthy schools and parks are also needed.

Rose aims to design buildings that encourage diversity and encompass multiple income levels and uses, such as residential and commercial space. He described several projects, including one that uses a V-shaped roof to welcome or avoid the sun, depending on the season.

Another project, on a long, narrow, north-south oriented lot, is lower on the southern end and higher on the northern end to maximize exposure to the sun. It also has rooms designed to maximize airflow through windows, to provide cooling during a summer power outage and for low-income residents who can’t afford air-conditioning.

His apartment building designs are population-dense, but he compensates by adding in nearby green spaces and rooftop gardens where possible.

Design can only go so far, however. The National Renewable Energy Laboratory building, designed to use zero net energy, didn’t perform as well as expected. An investigation found that staffers brought in coffeemakers, left lights on, and failed to turn computers off.

“We absolutely need insulation … we need to design greener buildings, we need solar, we need renewable energy,” Rose said. “But energy use itself is a human behavior and we have to address” it.