Board of Overseers 2013 election results 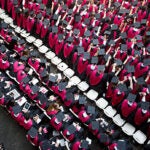 Joy by the Yard

The elected directors of the HAA were also announced

Judge, United States Court of Appeals for the Second Circuit. She is a graduate of Harvard College (A.B. 1973) and Harvard Law School (J.D. 1977)

Melvin and Joan Lane Professor for Interdisciplinary Environmental Studies at Stanford University and founding director of the Department of Global Ecology at the Carnegie Institution for Science. He is a graduate of Harvard College (A.B. 1975) and holds his Ph.D. from Stanford (1981).

Chief Communications and Digital Strategies Officer for Carnegie Corporation of New York.  She graduated from Harvard College in 1984.

Senior partner and head of International Private Equity at Apollo Global Management. He graduated from Harvard in 1983 with both an A.B. and an S.M., and he holds his M.B.A. degree from Stanford (1987).

Managing director and co-founder of Lighthouse Capital Partners, which provides financing to early- and growth-stage technology, life science, and clean-tech companies. She is a graduate of Harvard College (1980) and Harvard Business School (M.B.A. 1984).

The five new Overseers were elected for six-year terms. They were chosen from a slate of eight candidates, who were nominated by a Harvard Alumni Association committee in accordance with the election rules.  Harvard degree holders cast 26,798 ballots in the election.

The primary function of the Board of Overseers is to encourage the University to maintain the highest attainable standards as a place of learning. Drawing on the diverse experience and expertise of its members, the Board exerts broad influence over the University’s strategic directions, provides essential counsel to the University’s leadership on priorities and plans, has the power of consent to certain actions such as the election of Corporation members, and directs the visitation process by which a broad array of Harvard schools and departments are periodically reviewed.