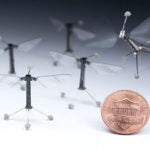 Given the ubiquity of mobile devices and high-speed Internet, it can be tough for students to imagine life just 30 years ago, let alone 30,000.

Turns out, though, it’s not impossible.

Students in Matthew Liebmann’s “Encountering the Conquistadors” class recently got a feel for prehistoric life, trying their hands at an ancient weapon called the atlatl.

“We’ve been studying first contacts in the New World from Columbus on, and this is a chance for students to get firsthand use of some of the technology they’ve been reading about,” said Liebmann, an associate professor of anthropology. “I think there are a lot of assumptions about the superiority of European technology, and in some cases that was certainly an advantage in the conquest of the Americas, but Native Americans were using technology the Europeans weren’t familiar with either, often with deadly results.

“This is also a lot of fun,” he added. “It’s nice to get out of the classroom — it adds a fun aspect you don’t get in many classes.”

The atlatl was a dominant weapon for centuries, until the rise of the bow and arrow after the arrival of Europeans. Typically about 2 feet long, with a notch at one end and a spur at the other, it functions like an extension of the throwing arm, allowing users to hurl 6-foot, stone-tipped spears — referred to as darts — with great force and speed.

While the students weren’t facing an army of conquistadors, they still had plenty to aim at — including foam archery targets of deer and boar, and, with Liebmann’s encouragement, a cardboard cutout of their teacher. To up the stakes, points were awarded for each hit (Liebmann’s cutout had the highest value), and the six sections of the class battled for bragging rights.

Behind the fun, however, was a serious lesson — not just about how the atlatl worked, but about gaining insight into the lives of the people who relied on the weapon day to day.

“After an entire semester of trying to visualize what we are learning about, it’s great to have the chance to do this,” said Audrey Carson ’15. “It’s interesting to step into this role and look at what we’ve learned through a different lens.”

“It’s a new way of learning,” agreed Joe Petrucci ’14. “Instead of reading books, we get the chance to come out here in the field and practice something that ancient people did. It definitely puts things in perspective.”