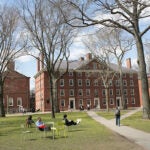 Richard J. Murnane, the Juliana W. and William Foss Thompson Professor of Education and Society at the Harvard Graduate School of Education (HGSE), will serve as acting dean of the HGSE, President Drew Faust announced today.

Murnane will take up the post on July 1, when Dean Kathleen McCartney leaves Harvard to become president of Smith College, and will serve until the HGSE’s new dean is appointed and in place.

“Dick Murnane has long been an admired leader within the Ed School faculty, recognized for his excellent scholarship and teaching, his wide experience and collegial style, and his deep devotion to the School and its beneficial impact on education policy and practice,” Faust said. “I am grateful to him for taking on this interim role, and I know he can count on the advice and support of people throughout the HGSE community.”

Said Murnane: “I am honored that President Faust has asked me to serve as acting dean of the Harvard Graduate School of Education, an institution that has a special place in my heart. I am pleased to serve the School during this period of transition.

“My colleagues and I are gratified by President Faust’s efforts to find a dean who will lead our vibrant School well,” added Murnane, who is a member of the faculty advisory committee working with Faust on the search. “I believe that the search is going well and that we will have a new dean soon.”

Murnane joined the HGSE faculty in 1983. A leading scholar at the nexus of education and economics, he is also a research associate at the National Bureau of Economic Research.

In recent years, with colleagues Frank Levy and David Autor of the Massachusetts Institute of Technology, Murnane has examined how computer-based technological change has affected skill demands in the United States economy and the effectiveness of education policies in responding to such demands. With Greg Duncan of the University of California, Irvine, he has studied how rising family income equality in the U.S. has affected educational opportunities for children from low-income families and the effectiveness of strategies for improving such children’s life chances. In 2011, with his HGSE colleague John Willett, Murnane published “Methods Matter: Improving Causal Inference in Educational and Social Science Research” (Oxford University Press).

A graduate of Williams College, Murnane holds his M.A. and Ph.D. in economics from Yale. Before coming to Harvard in 1983, he was a member of the economics faculty at the University of Pennsylvania and then at Yale. He is a member of the Academy of Arts and Sciences and the National Academy of Education as well as a fellow of the Society of Labor Economists. Currently a member of the boards of the Spencer Foundation and MDRC, he has previously served on the board of directors of the National Academy of Education, on the policy council of the Association of Public Policy and Management, and on various committees and advisory boards of the National Research Council.

In a message to the HGSE community, Faust said that the search for a long-term dean “is progressing well, thanks to the helpful counsel of the faculty advisory committee working with me on the search and to the insightful advice I have received from so many people across the School and the University.

“For now,” she added, “with the academic year nearing a close, and with Kathy McCartney approaching the end of her outstanding deanship, I wanted to let you know about Dick Murnane’s interim appointment. Please join me in thanking him for his leadership and his willingness to serve — and in again thanking Kathy McCartney for her remarkable service to Harvard.”