‘A lifetime of limitless possibility’ 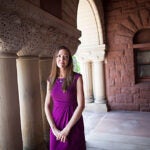 For alumni who remain connected to the University community even after their days on campus have faded into memory, the promise of Harvard lasts a lifetime.

That’s the message Carl F. Muller ’73, J.D. ’76, M.B.A. ’76, leaves behind as he prepares to step down as president of the Harvard Alumni Association (HAA). During his year at the HAA helm, Muller called upon alumni to view Harvard as a powerful thread that connects their past, present, and future lives. “My hope is for alumni and students alike to understand that Harvard is not just an academic institution,” says Muller, an attorney in Greenville, S.C. “For those who choose to stay connected, it is a lifetime of limitless possibility. Everything I did during my time as HAA president was directed toward that objective.”

That includes circling the globe. During the year, Muller and his wife, Allison, traveled for Harvard to San José, Costa Rica, Dublin, Hong Kong, Kuala Lumpur, Malaysia, Shanghai, and Vienna, as well as Houston and San Francisco. “The journey opened our eyes to the place of Harvard in the world,” Muller says. “Harvard is truly a force. Equally important, it is seen as a force, especially in faraway lands.” Indeed, one of Muller’s favorite moments of his HAA presidency came during his trip to Hong Kong, where he introduced President Drew Faust to 500 enthusiastic alumni. “She and they were in heaven,” he recalls.

Another standout occasion, Muller says, was addressing graduating seniors at Class Day — an event he describes as “always totally hilarious.” Muller implored the Class of 2012 to stay connected and “never relinquish the feeling of your first day at Harvard.”

Keeping that sentiment alive is incoming HAA President Catherine A. Gellert ’93, who intends to build on Muller’s vision as she works to inspire alumni to engage and connect. “Connection doesn’t mean just coming back for events,” Gellert says, “but also recognizing the many ways connection can happen and the role Harvard can play in facilitating it.” Gellert will also expand upon “the wonderful work the HAA has done to create strong communities through its clubs and Shared Interest Groups [SIGs].”

Gellert has been actively involved with the HAA and the Harvard College Fund for many years, serving as an HAA elected director and vice president and committee chair of the association’s Engagement and Marketing Committee. As the HAA’s first vice president, she worked closely with staff to interpret data from a recent worldwide alumni survey. Those efforts, combined with Muller’s leadership, have helped the HAA achieve new levels of growth. The success is a result of strong alumni volunteer leadership and the work of the HAA team, led by Executive Director Jack Reardon ’60 and Deputy Executive Director Philip Lovejoy.

“Kate and I come from very different backgrounds but share a common vision for Harvard,” Muller says. “It is essential, as Harvard moves into the future, that it preserve the institutional memory that has made it great. Kate is both a torchbearer and a guardian of the flame. She is the perfect successor.”

Gellert says it has been wonderful working with Muller over the past year. “He is extremely eloquent and a terrific statesman for our alumni,” she says. “He cares deeply about this institution and has been able to bring its rich history to the present through his wit and wisdom.”