A fascination with fixing bodies 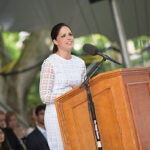 Joshua Wortzel busied himself in his basement lab as a boy, becoming a kind of scientific matchmaker to a group of mice, breeding them in an effort to alter their fur.

He was in the sixth grade and was inspired by a classmate’s experiment that taught mice how to navigate a maze. Wortzel, now a graduating Harvard College senior, recalled that her efforts were cool. But what would be even cooler, he thought, would be mice with “crazy coat colors.” His fuzzy critters ended up with “some really cool coat patterns.”

Then some of them escaped.

“In retrospect, my mom was completely right in asking me to end the experiment,” he said, “and so I moved to guppies for a couple of years.”

Wortzel’s longtime fascination with cell manipulation and genetics — he saved his birthday money over the years to get his DNA sequenced at age 10 — attracted him to the Harvard Stem Cell Institute.

“It’s unique. It essentially doesn’t exist anywhere else,” said the Lowell House resident and human developmental and regenerative biology concentrator. “Being able to take classes with these stem cell scientists — needless to say, Harvard is an amazing place.”

For the past four years, Wortzel has worked closely on the regenerative side of his concentration exploring how to re-create damaged or diseased tissue. At Harvard, he spent much of his time in the cardioregenerative lab of Professor Richard T. Lee, where he helped to develop a protein to protect cancer patients’ hearts when they are exposed to cardiotoxic chemotherapeutics. His thesis work, which examined the regeneration of blood vessels, has implications for diabetic patients, who often suffer with sores that won’t heal and can face the loss of a limb.

“It would be really cool to be able to regenerate blood vessels in the skin for these patients, which would allow us to successfully put new skin grafts on their wounds so they don’t end up with amputations.”

A year at the University of Cambridge in England is the next stop for the Pennsylvania native, who, thanks to a Harvard Herchel Smith postgraduate fellowship, will pursue a master’s degree in translational medicine and therapeutics before heading to the Stanford University School of Medicine. His long-term plan is to be “involved in an institute for translational medicine … where you work with basic scientists to help make drugs to regenerate patient tissues.”

The far-reaching implications of such work, Wortzel said, might include helping patients to regrow tissues removed due to cancer, assisting a transplant patient’s immune system in accepting a donor organ, or even fighting heart disease.

“Twenty-five percent of deaths in the U.S. each year are due to heart muscle cell death, so if there is any way that you could try to regenerate the blood vessels that supply blood to the heart or replace heart tissue itself, you could just help so many people.”

Like many undergraduates, Wortzel arrived on campus with a range of other interests, including a love for gardening inherited from his grandfather, and a passion for music and theater, which were passed on to him by his parents.

At the Harvard Community Garden, you can see the fruits of his green labors, like the vegetable beds and, in the fall, his famous bearded scarecrow. He is the garden’s “official scarecrow maker.”

“There is nothing more wholesome than watering something and having it blossom into something green that gives you oxygen and tastes good. And gardening also allows you to grow closer to other people in the process,” he said.

In addition, if you happened to catch this year’s Lowell House opera production of William Shakespeare’s “A Midsummer Night’s Dream,” you would have seen Wortzel in the plum role of Puck.

Eventually, Wortzel hopes to combine his passions, bringing new technology to the world, but also bringing theater and song, and maybe even a garden or two, to the hospitals where he will work.

“I hope to try to continue,” he said, “to keep a lot of my passions alive.”