When passers-by are artists 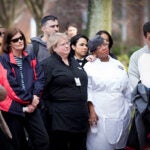 A loss close to home

Mural reflects what cultural and religious diversity look like

By Photos and text by Katherine Taylor

“Come paint!” Diana Gilon encouraged almost every person who passed her mural in progress, attracting a steady flow of participants.

Gilon, an artist specializing in community projects, brainstormed with Harvard students about what cultural and religious diversity looked like and meant to them.  The group decided on an image of the Holi festival, a Hindu spring fete of colors.

“It was really important for the entire group, not to just do a montage of religious symbolism put together.  It was really exciting to focus on one tradition,” Gilon said.

With the support of Harvard Hillel, Harvard Memorial Church, the Harvard Chaplains, and Combined Jewish Philanthropies in Boston, Gilon and a number of Harvard students were able to devote a week to painting the mural.  Gilon helped students mix paint and showed them where to apply it to the mural whose outline she had stenciled ahead of time. Some students were artists; others just wanted the chance to spend time in the group. There was a relaxed atmosphere and lighthearted chatter among people meeting each other for the first time.

“The fact that these projects are time-consuming, it’s a way that people can work side by side who wouldn’t necessarily work together in another setting … in time they can connect on a friendship level and then maybe dive deeper into things that would make them normally uncomfortable to talk about right away,” Gilon said.

Work on the mural has been extended through Thursday at the Rieseman Center for Harvard Hillel, 52 Mt. Auburn St. The community is invited to stop by and view the artistic endeavor. Building hours are 9 a.m. to 4 p.m. Monday-Thursday.