What rocks can teach 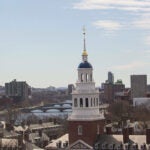 Resources in the aftermath of tragedy

The collections, showcased in a gallery at the Harvard Museum of Natural History, have long included the showstoppers: fantastic crystalline shapes of brilliant red, orange, and blue; semiprecious gems; and even meteorites, visitors to Earth from the distant asteroid belt.

But Macdonald, an assistant professor of earth and planetary sciences, thought the venerable gallery should go beyond just “pretty,” incorporate more science, and tell more about the story of the Earth and the processes that created it.

That sensibility is what drove a renovation of the Earth and Planetary Sciences gallery at the Harvard Museum of Natural History, one of the Harvard Museums of Science and Culture. Macdonald and museum officials felt it was time to link the beauty that has always been there more closely to the story of the Earth and to the work of faculty members in the Department of Earth and Planetary Sciences.

“The data for these stories [about the Earth], we actually get from these stones,” said Macdonald, the lead scientist who helped to develop the new exhibits. The renovation was funded partly by the department and partly through a grant Macdonald received from the National Science Foundation.

The renovated gallery, which opened early this month, includes new panels telling the history of the Earth, starting with plate tectonics and continuing along a timeline running down the east wall. The timeline features specimens for visitors to touch, including a sample of the oldest rock on Earth, a stone from a time when the planet was nearly entirely covered in ice, and samples illustrating the rise of life on Earth (though in keeping with the gallery’s geological theme, it is life turned to stone in the form of fossils).

The renovation also saw the removal of several display cases in the center of the room to make space for an exhibit that will showcase the work of faculty members. Now, it represents Macdonald’s work in the Arctic, and includes a large relief map of the region with the ice removed, touchable so visiting schoolchildren can get a feel for the undersea ridges and ocean basins.

The specimens on display are just part of a vast collection held by the Harvard Mineralogical and Geological Museum, which is one of three museums that make up the Museum of Natural History. The collection, used for both teaching and research, holds 300,000 specimens, including samples of nearly 600 meteorites and 1,000 gemstones.

Associate curator Raquel Alonso-Perez said that the renovations included refurbishing the existing display cases and improving lighting. Officials reviewed the samples on display, replacing about half of the 3,000 specimens there, Alonso-Perez said, and dedicated one case to birthstones, which visitors often ask about.

When asked about his favorite specimens, Macdonald turned from the more showy samples to those he has collected personally, which not only conjure memories of his field trips, but also help him to tell the scientific story of how today’s Earth came to be.

“The idea is that the rocks are the data,” Macdonald said. “One of the [motivations] for me is showing that geology and mineralogy are active and alive.”