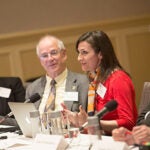 Points of comparison for modern temperatures in researchers' modeling

Harvard researchers are adding nuance to our understanding of how modern and historical temperatures compare.

Through their statistical model of Arctic temperatures and how they relate to instrumental and proxy records, Martin Tingley, a research associate in the Department of Earth and Planetary Sciences, and Peter Huybers, professor of earth and planetary sciences, have shown that the warmest summers in the last two decades were unprecedented in six centuries.  The work is described in paper published in the April 11 issue of Nature.

“We call upon multiple proxies — including those derived from trees, ice cores, and lake sediments — to reconstruct temperature back through time using a Bayesian statistical approach,” Tingley said. “What we are trying to do is put statistical inference of past changes in temperature on a more solid and complete footing.

To assess such probabilities, Tingley and Huybers use a statistical model that gives a large ensemble of equally likely temperature histories for the last 600 years, as opposed to the single best estimate provided by most other reconstructions of the planet’s temperature.

“By sorting through these many plausible realizations of what Earth’s temperature may have looked like,” Huybers said, “it becomes possible to find the probability associated with a great variety of relevant quantities, such as whether the 2010 Russian heat wave was more anomalous than all other events or whether the trend in average temperature over the last 100 years is uniquely large.”

Perhaps the most basic quantity is average Arctic temperature, and Tingley said that the summers of 2005, 2007, 2010, and 2011 were each warmer than all years prior to 2005 in at least 95 percent of the ensemble members. Furthermore, the rate of temperature increase observed over the last century is, with 99 percent probability, greater in magnitude than centennial trends in the last 600 years.  At a regional level, the summer of 2010 featured the warmest year in western Russia, with 99 percent probability, and also featured the warmest year in western Greenland and the Canadian Arctic, with 90 percent probability.

Also notable: Although summer temperatures are clearly on the rise, the researchers found no indication that temperature variability has changed.  Events such as the 2010 Russian heat wave and the 2003 western European heat wave are consistent with the increase in mean temperature, after accounting for the fact that they are selected as some of the hottest years and locations.

“Insomuch as the past is prologue for the future,” Tingley said, “these results suggest that the hottest summers will track along with increases in mean temperature.” He explained, “If instead the distribution of temperatures were becoming wider, as well as shifting toward higher values, then the probability of extreme events would go up even more rapidly.”

But Tingley also acknowledged the limitations of the results and the need for further work. “The proxies, unlike thermometers, generally only give information about seasonal average temperatures, and we have not explored changes in variability at the daily and weekly timescales associated with weather patterns,” he said. “It will be interesting to further explore instrumental records and higher resolution proxies for trends at these shorter timescales.”