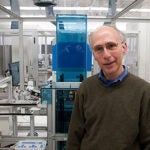 Suppose you had $1,000 to invest in the stock market. How would you decide to pick one stock over another? Scientists have made great progress in understanding the neuroscience behind how people choose between similar options.

But what happens when neither choice is right?

During an economic downturn, for instance, your best option might be not to invest at all, but to wait for market conditions to improve.

Using an unusual decision-making study, Harvard researchers exploring the question of motivation found that rats will perform a task faster or slower depending on the size of the benefit they receive, suggesting that they maintain a long-term estimate of whether it’s worth it to them to invest energy in a task.

As described in an April 14 paper in Nature Neuroscience, a research team led by Naoshige Uchida, associate professor of molecular and cellular biology, found that rats averaged how much benefit they received over as many as five trials. When their brains were impaired in one region, however, the rats based their actions solely on the prior trial.

“This is a new framework to think about decision-making,” Uchida said. “There have been many studies that focused on action selection or choices, but the question of the overall pace or rate of performance has been largely ignored.”

To get at those decision-making questions, Uchida and his team designed the experiment.

In each trial, rats were presented with an apparatus that had three holes. Based on whether a sweet or sour odor was delivered through the middle hole, rats went either left or right to receive a water reward. On one side they received a large reward; the other side delivered a smaller reward.

“What we measured was, after getting the reward, how quickly they went back to initiate the next trial,” Uchida said.

What researchers found, Uchida said, was surprising. When rats received, on average, a larger reward, they were more likely to quickly initiate the next trial, which suggested that they weren’t reacting merely to the prior result, but were “averaging the size of the reward from several previous trials.”

“They essentially calculate the average over the previous five or six trials, and adjust their performance accordingly,” Uchida said. “They’re making a calculation to determine whether they’re getting something out of the task or not. If it’s worth it for them, they go faster. If not, they go slower.”

When researchers impaired part of the striatum, a brain structure that is part of the basal ganglia and is thought to be involved with associative thinking, in the rats’ brains, however, that calculation changed. Rather than considering the average of multiple trials, the rats chose whether to go slower or faster based solely on the prior result.

In addition to shedding new light on how decision-making happens, the study may also offer some hope for people suffering from Parkinson’s disease.

Going forward, Uchida said, he hopes to study the role dopamine plays in regulating motivation and decision making, as well as working to understand what role other areas of the striatum might play in the process.

“There are some interesting similarities between this part of the striatum in rats and in humans,” he said. “One is that this area receives very heavy inputs from the prefrontal cortex. That’s an area that may be important in integrating information over a longer period of time. Deconstructing this process is a critical step to understanding our behavior, and this could go a long way toward that.”