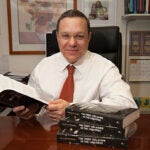 Scientists may soon be able to turn to one of the most powerful forces in biology — evolution — to help in their quest to develop new synthetic polymers.

As described in a recent paper in Nature Chemistry, a team of researchers led by David Liu, a professor of chemistry and chemical biology at Harvard, has developed a new method to create synthetic polymers using the coding of genetic material. The method may eventually be used to evolve synthetic polymers with new or improved properties such as the ability to serve as catalysts in chemical reactions or enhanced therapeutic potential.

“The word polymer, unfortunately, is pretty vague, but in biology, large molecules like DNA, RNA, and proteins are the most common polymers,” Liu said. “These polymers can have remarkable properties. Our ability to create man-made polymers with tailor-made properties, by comparison, is much more limited, in part because we don’t have a way to evolve synthetic polymers — that’s really the problem we set out to address.”

Other researchers have managed to create synthetic polymers using genetic coding, but their efforts were hampered by the fact that the new molecules necessarily resembled the genetic template used to create them.

To solve that problem, Liu and colleagues turned to a process similar to one found in nature.

Rather than allow the building blocks of a new polymer to interact directly with the DNA template, the system relies on an “adapter” molecule. The adapters, each of which carries a part of the polymer, bind to the template, forming the new polymer. In the final step of the process, Liu said, the adapters are cut away, leaving a synthetic polymer created according to the genetic template.

“One of the interesting features of this system is that the synthetic polymers that come out of the system don’t need to have any structural relationship to the DNA template,” Liu said. “The part of the system that binds with the DNA bases is the adapter molecule, so it’s physically removed from the template. The overall strategy is heavily plagiarized from protein synthesis in nature, in which tRNA molecules bind to a messenger RNA strand, and the amino acids they carry get stitched together into a protein.”

In theory, once created in a manner dictated by a genetic template, new synthetic polymers can be “evolved” to have unique properties that would be all but impossible to design in the lab from first principles.

As an example, Liu said, suppose you want to create a synthetic molecule that turns on the expression of a specific gene in the presence of a protein associated with cancer, or when glucose levels are too high. You might begin by reviewing current research for clues about how to build such a molecule, and you could use your knowledge of chemistry to begin to determine what that molecule might look like. But for such complex molecular goals, those efforts would allow for little more than well-educated guesses.

“That kind of task — the ability to bind very specifically to a certain molecule and create a biological response, for example — might not sound very difficult, but that’s exactly the type of activity that’s very difficult for polymer scientists to design from scratch, but not that difficult for nature to evolve,” he said. “Evolution is a more powerful approach to accessing molecules with sophisticated functions than simply guessing how a molecule with those properties should be put together.

“Nature can go through millions of generations of trying things semi-randomly, but at each generation the most successful of those strategies pass on their molecular secrets to the next generation,” he continued. “Because evolution is iterative, small progress in any generation can be inherited and can be developed into major success later on.”

Liu said his next goal is to use the system to evolve synthetic polymers that can do increasingly complex things, starting with folding into structured three-dimensional shapes, then moving on to binding specific molecules of biomedical or chemical interest, and finally catalyzing chemical reactions.

“No synthetic polymer has yet been truly evolved, and we are hopeful that this system is a first step toward reaching that goal,” he said.

While the research opens to the door to possibly cutting the manufacturing cost of a host of drugs and compounds, it also has the potential to help scientists answer long-standing questions about the nature of life, Liu said.

“Many scientists wonder why the workhorse polymers nature translates from genes are proteins, or why the 20 building blocks of proteins have the particular structures that they have.  Those questions are very difficult to answer now,” he said. “But if we could evolve a synthetic polymer to perform the same task as a biological one, we could perform a host of studies that could illuminate these issues. Is the resulting polymer more active? Is it more selective? Is it more resistant to environmental conditions, or to degradation by biological enzymes? How does the structure of the building blocks of a polymer — biological or man-made — determine its evolutionary potential?  We hope this study brings researchers one step closer to being able to answer these questions.”