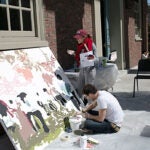 When passers-by are artists

Harvard runners band together in aftermath of bombings

The Lowell House dining hall at 7 a.m. Monday was abuzz with energy, and doing brisk business in peanut-butter-and-banana sandwiches.

“Everybody psyched?” Daniel Lieberman, professor and chair of human evolutionary biology and a dedicated runner, asked a group of students loading up on carbs. At that moment, it was a rhetorical question. The clear, crisp morning promised a perfect day for a run.

For Harvard’s small but dedicated community of distance runners, the Boston Marathon is a team sport — an attitude on display that morning as students, faculty, and staff prepared to board a bus bound for the starting line in Hopkinton. Some had qualified for the big race, many were charity runners, and a few planned to run alongside friends to help them keep up their pace. Some were old hands: Dunster House tutor Kirstin Scott was gearing up for her 20th marathon. Several were running 26.2 miles for the first time. They had spent months working to improve their times, prodding each other to meet before dawn for the long training runs.

But when their excitement turned to confusion, panic, and sadness that afternoon after two bombings that killed three people and injured scores, Harvard’s running community pulled together for a different reason. They sent out dozens of emails — over the Harvard College Marathon Challenge (HCMC) email listserv — to track down missing runners and volunteers. Runners who weren’t at the scene offered stranded participants rides back to Cambridge. Recent alumni living in Boston came out of the woodwork to offer up their apartments overnight.

The flurry of activity “was an example of what a supportive community of runners we have at Harvard, one that is reflective of the kinds of running groups that exist all over the world,” Lieberman said Tuesday.

“The Harvard community, and the Harvard running community, is a wonderfully close and resilient group of extraordinary individuals,” Craig Rodgers, who runs the HCMC listserv, as well as many other running events on campus, said Tuesday. “This has been made clear time and again in the past 24 hours.”

For many students, that community — and oddly enough, a simple email forum — served as a logistical backbone during the aftermath of the attack, and as a place to share stories and support as the difficult week went on.

“It’s a listserv, but really it’s a community of people who are united by their love of running,” said junior Sarah Siskind. “I have made so many friends who have stayed with me over the years, and made so many fantastic memories just from meeting people over the list.”

On Monday, Siskind was running with one of those friends, junior Ginny Fahs, and two other women. At mile 20, she said, she told Fahs she’d have to speed up to make it back to campus for class. When she came upon a bottleneck at the 26-mile marker and realized something was wrong, instinct kicked in. She hopped a fence, ran back to Harvard, and arrived at her Spanish class in time to give a presentation. When her professor asked her how the marathon had gone, all she could manage in Spanish was, “There was a bomb.”

“I was in a state of confusion,” Siskind said Tuesday. “I don’t know how to describe it except for confused and stunned.” After contacting family and friends, she found time that evening to make it to Quincy House, where HCMC hosted a post-run dinner and dessert night.

“We will grieve, but we will overcome,” she said. “That is one of the only things I’ve really had a grasp on since yesterday. This is absolutely not going to change my running habits.”

Seniors Ali Evans and Robert Tamai were supposed to have run the marathon together last year, Evans for the Phillips Brooks House Association and Tamai for the American Medical Athletic Association. But last spring, Tamai suffered an injury that forced him to sit out.

Then, he and hundreds of other 2012 runners received a lucky reprieve. The extreme heat at last year’s race prompted Boston Athletic Association officials to give a pass to runners who wanted to sit out until 2013. So Tamai continued to train, and Evans agreed to run with him this year as a pacesetter.

Given Monday’s ideal conditions, the two were on track to beat their goal of four hours. Tamai crossed the finish line at 3:59:03, with Evans just seconds behind him. On the HCMC listserv, Evans recounted beating his chest, picking up Tamai, and shouting, “We did it!” The time was 2:49 p.m. One minute later, they heard a blast.

“When I saw the smoke rising and heard the initial screams, I turned to Robert and yelled, ‘Run, man, RUN!’ ” Evans wrote afterward. They sprinted a few blocks away. Evans shouted the Lord’s Prayer “at the top of my lungs, repeatedly.” Their friends who had been waiting for them, who had run to the finish line to meet them, had been 10 yards from the first explosion. None of their group was harmed.

Then they checked in by email, adding their names to a chorus of voices responding on the listserv: “I’m OK!” “I’m safe walking back on Mass Ave right now.” “I am safe, and I hope everyone else is!”

“It was amazing to see everyone [at Harvard] respond so quickly and to be so generous in relaying information to family members, friends, and others to make sure that everyone knew they were OK,” Tamai wrote later.

Over the years, a loosely connected but enthusiastic group of runners has taken in newcomers from across Harvard: curious freshmen, looking for a noncompetitive sport after years of high school athletics; visiting pre-frosh (on Saturday, HCMC will host its annual Visitas run, a jogging campus tour that gives admitted high school seniors a chance to chat with Harvard students); faculty and staff who are new to the Boston area. Even Provost Alan Garber, a veteran marathoner, found himself drawn into the fold when he arrived at Harvard in 2011.

“Before I came to Boston, I did almost all of my training by myself,” Garber said. “It was simply too difficult to arrange the timing to run with somebody else. Here I’ve had the opportunity to run with a great community.”

To many, that community is personified by Rodgers, a counselor/psychologist at the Bureau of Study Counsel, who has long been interested in helping high school athletes coming to Harvard, particularly former track stars who don’t plan to run in college, transition to a different kind of exercise — marathon training or just regular distance running.

“It requires a significant mental shift from running as fast as you can and trying to win something to training for a distance run over many hours that you’re highly unlikely to win,” he said. “It requires a shift in motivation and in focus.”

In 2005, he started the Harvard College Marathon Challenge, which helps to procure charity spots (including 17 this year) for Harvard runners, and which spawned the email listserv that gives rise to dozens of informal runs each week.

“One of the things that makes [the group] so successful is the informality,” Rodgers said. “Because everyone here is so busy, it’s hard to make a schedule.” The fact that runners can access 500 potential jogging partners with a single email lowers the barrier for getting together, he said.

Since Rodgers started HCMC, other groups have sprung up as well: the Harvard College Running Club, a student group, and Harvard on the Move, a University-sponsored initiative that hosts informal runs and walks multiple times a week on the Cambridge and Longwood campuses. The boundaries between the groups are less important than the excitement they’ve collectively generated for the sport, Rodgers said.

“There are no turf wars,” he said. “It’s not just me out there encouraging people [to run]. I need to be a bit of a cheerleader in the cold winter months, but by no means am I the only one.”

To Lieberman, one of the world’s foremost authorities on running’s evolutionary benefits, running is and always has been a community affair, a fact that’s important to reiterate now more than ever. “We will keep on running with a renewed sense of purpose,” Lieberman said. “We have always run to help each other and to make the world a better place, but to these objectives we will add another: to prove that evil cannot stifle love.”

By Tuesday night, the frantic wave of emergency posts to the HCMC listserv had receded. Different kinds of emails — the usual ones — started trickling in. A day after the marathon, Harvard’s runners were back on the horse, doing the one thing that felt right.

“Recovery Run: 8 a.m. For the early birds out there, and/or those with early class.”

“No pace too slow or distance too short. Come one come all.”