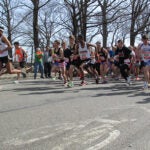 Harvard comes out for City Run/Walk

Harvard will close the week with doubleheaders against Yale

After dropping the first game of their doubleheader with Princeton, 4-1, on April 5, the Crimson came back to win the second, 11-3. Katherine Lantz ’15 and Kasey Lange ’14 both had three runs batted in, while Stephanie Regan ’13, Shelbi Olson ’14, and Emily Gusse ’15 all had strong performances at the plate. Jamie Halula ’16 pitched for the win.

The next day Harvard split another doubleheader with Cornell. The Crimson lost the first game, 10-7, but roared back to take the second, 11-2, on a walk-off grand slam by Haley Davis ’16. Harvard now stands at 4-4 in the Ivy. The Crimson edged BU in a non-conference game Tuesday, 2-1. They close out the week with back-to-back doubleheaders in a four-game set against Yale this Friday and Saturday.

To read the full story. For more information on women’s softball.