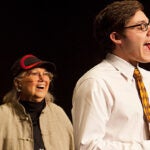 Celebrated Harvard bacterial geneticist Jonathan Beckwith has always been keenly aware of his work’s social implications, and for 30 years he has made sure that his students have been aware of them, too.

Since 1983, the professor has helped both Harvard graduate and College students navigate and appreciate science’s broader impact in the world through his course “Social Issues in Biology.” In the domain of genetics and genetic manipulation, where science can bump up against tricky moral ground, a better understanding of the implications involved and how they are presented to the public is essential, Beckwith argues.

“My passion about doing this has been to encourage the students who are going into science to retain a concern about the social implications of science,” said Beckwith, “because there aren’t too many around who do.”

Now he is bringing that message to the stage. This spring, Beckwith is teaching his popular class with the help of rising star and Harvard alumna Calla Videt, who created a play for the course focused around some of those complex themes. On campus for a five-week residency sponsored by Harvard’s Office for the Arts’ Sophie H. and Roger L. Clifton Young Women Artists’ Fund, Videt developed the play with help from Beckwith’s students.

As a student, Videt arrived at Harvard set on a career in physics but soon shifted gears, gravitating to the stage and pursuing her science interests “through a different sort of medium, even if it wasn’t as scientifically rigorous.” She immersed herself in theater, applied for a special concentration in physics and theater, and developed a theater piece for her senior thesis called “The Space Between,” about American theoretical physicist and Nobel laureate Richard Feynman. Today she heads the New York City theater company Sightline, which she founded with a group of Harvard alumni in 2010.

“I think it’s an unusual collision of worlds, ideas, and people and I think that’s what makes it exciting as well as a challenge,” said Videt of the theater project, which will culminate in five performances in Harvard’s Science Center this weekend. “For the past couple of years I have been mostly working with artists and suddenly you have a real collaboration between people who aren’t necessarily working in the same fields and don’t approach ideas necessarily the same way. As much as it’s about the stories we are telling, it’s also about the modes of communication and the educational value of these sort of experiences.”

Theater has long been an important teaching tool for Beckwith. The American Cancer Society Professor in the Department of Microbiology and Immunobiology at Harvard Medical School first fell in love with the art form during a production of Samuel Beckett’s absurdist play “Waiting for Godot.” But it wasn’t until his encounter several years later with “Copenhagen,” the Tony Award-winning play by Michael Frayn about a mysterious meeting on the atomic bomb between scientists and Nobel laureates Niels Bohr and Werner Heisenberg, that Beckwith thought about incorporating theater into his curriculum.

“I was so excited about the way it presented the life of scientists, how scientists behaved with each other, and scientific concepts … it just amazed me. I thought it was so effective and emotional.”

Beckwith started using the play as a topic for class discussion and looking for other theater works with science themes that he could weave into the course. Then he took a trip to Berlin.

A professor from Freie Universität Berlin, who had been teaching a course modeled on Beckwith’s, invited him to take part in a collaboration between her class and the English Theatre Berlin. The students read the script of a play based on science, and met with the show’s cast and director for a discussion about the work and its broader implications.

Determined to replicate that experience in Cambridge, Beckwith enlisted the help of former student and theater buff Ben Morris. Morris, who knew Videt from his work with the Harvard-Radcliffe Dramatic Club (HRDC), immediately connected her to Beckwith.

“They were the perfect fit,” said Morris, who is pursuing his Ph.D. in biology and serves as teaching assistant for Beckwith’s class.

Instead of working on an existing play, Videt decided to create one. “The Edge of the Map” melds video, live performance, and physical theater around difficult topics like the human predisposition toward an inherited disease, forced sterilization, and the notion of genetically engineering a perfect child.

On a Wednesday evening, the young cast and crew trickled into a new space in the Science Center, a revamped classroom and physics lab on the building’s third floor. With support from Hauser Grants, the 2,500-square-foot space has been transformed into an experimental classroom with rolling desks, chairs, and whiteboards. The hall perfectly doubles as a theater for the play.

One early arrival for an evening rehearsal was senior Brianne Holland-Stergar. The Dunster House resident and HRDC actor plays Davenport, a eugenicist who forces an unsuspecting young girl to get sterilized. Her character is derived from the case of Leilani Muir, a young Canadian girl who was institutionalized and unknowingly sterilized in 1959.

“It was a challenging head-space,” said Holland-Stergar of the play’s difficult subject matter. The history of science concentrator also hopes to one day unite her love for science with her love of the stage.

“The two processes marry each other in a really cool way, and I think that people are encouraging creativity in science more, and hopefully science in creativity more.”

As part of the collaborative process, Videt spent time with Beckwith’s class, bouncing around ideas for her play, reviewing and reworking the script, and exploring the notion that art can help people grapple with some of science’s difficult moral dilemmas.

Later, as the play took shape with help from several Harvard undergraduates who serve as cast, crew, and co-creators, students from Beckwith’s course sat in on rehearsals and offered feedback, ensuring that the work stayed true to the science driving the narrative. (In March, Videt also helped to organize and run a two-day symposium that included a lecture by Beckwith, and various dance and performance workshops.)

“They really wanted to be part of this because the process of making art means so much to them,” said Videt.

The play’s assistant stage manager and assistant producer, Dunster House resident Sofie Seymour, was busy Wednesday fine-tuning the last-minute lighting details. She heard about Beckwith’s course through an HRDC email last fall, and her first thought was, “I have to be in this class.”

In addition to blending her interests in science and theater, the course, she said, has taught her the importance of generating conversations around ethical dilemmas in science, as well as conversations around science’s implications, limitations, and misconceptions. “These conversations can be generated in the classroom or in the theater, or, in this case, a physics lab that a group of actors have taken over. I think what this process has emphasized is how important they are to have.”