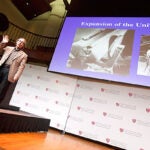 Insignificant, with a lousy future

What use is a hand without nerves, that can’t tell what it’s holding? A hand that lifts a soda to your lips, but inadvertently tips or crushes the can in the process?

Researchers at the Harvard School of Engineering and Applied Sciences (SEAS) have developed a very inexpensive tactile sensor for robotic hands that is sensitive enough to turn a brute machine into a dexterous manipulator.

Designed by researchers in the Harvard Biorobotics Laboratory at SEAS, the sensor, called TakkTile, is intended to put what would normally be a high-end technology within the grasp of commercial inventors, teachers, and robotics enthusiasts.

“Despite decades of research, tactile sensing hasn’t moved into general use because it’s been expensive and fragile,” explains co-creator Leif Jentoft, a graduate student at SEAS. “It normally costs about $16,000, give or take, to put tactile sensing on a research robot hand. That’s really limited where people can use it. The traditional technology also uses very specialized construction techniques, which can slow down your work. Now, Takktile changes that because it’s based on much simpler and cheaper fabrication methods.”

TakkTile takes an existing device — a tiny barometer, which senses air pressure — and adds a layer of vacuum-sealed rubber to it, protecting it from as much as 25 pounds of direct pressure. Jentoft and co-creator Yaroslav Tenzer, a postdoctoral fellow, say that the chips can even survive a strike from a hammer or a baseball bat. At the same time, TakkTile is sensitive enough to detect a very slight touch.

Beyond robotics, Jentoft and Tenzer suggest that the TakkTile sensor could be used in a range of electronic devices. A toy manufacturer could make a stuffed puppy that responds to petting; a medical device designer could create a laparoscopic gripper that’s gentle enough to tease apart tissue during surgery.

“Not everyone has the bandwidth to do the research themselves, but there are plenty of people who could find new applications and ways of using this,” says Tenzer.

The sensors can be built using relatively simple equipment; the patented process relies on standard methods used in printed circuit board fabrication, along with access to a vacuum chamber. The tiny barometers are available cheaply because they have been widely used in cellphones and GPS units that can sense altitude.

Along with their adviser, Robert D. Howe, Abbott and James Lawrence Professor of Engineering at SEAS, Jentoft and Tenzer are pursuing commercial opportunities with help from Harvard’s Office of Technology Development. Harvard plans to license the technology to companies interested in offering prefabricated sensors or in integrating TakkTile sensing into products such as robots, consumer devices, and industrial products.