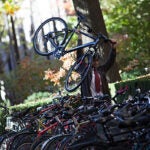 An award for bike-friendly Harvard

Harvard Professor of Economics Raj Chetty has been awarded the 2013 John Bates Clark Medal in recognition of his work, which combines empirical evidence and theory to inform the design of more effective government policies on everything from taxation to unemployment to education.

Considered by many to be second only to the Nobel Prize in prestige, the medal is awarded annually by the American Economic Association (AEA) to an American economist under the age of 40 who is judged to have made the most significant contribution to economic thought and knowledge. At 33 years old, Chetty is the second-youngest ever to receive the award; Paul Samuelson was 32 when he received the first Clark Medal in 1947.

“I was very surprised, honored and excited,” Chetty said, of his reaction upon learning he’d been selected. “The list of past recipients of this award is incredible, and includes many of my colleagues in the Economics Department here at Harvard, as well as people who have served as secretary of the Treasury of the United States or as the president’s chief economic adviser, as well as many Nobel laureates — to be included in such a group is a great honor.”

By synthesizing new evidence about human behavior with research from a wide array of economic fields, Chetty has been able to put new focus on a host of public policy issues ranging from how tax policy can affect savings to the impact teachers can have on students’ future earnings.

“Raj Chetty is a remarkably productive economist whose contributions assimilate evidence using a variety of methodological perspectives to shed new light on important public policy questions,” the AEA wrote, in presenting Chetty with the medal. “His work extends basic price theory by incorporating behavioral and psychological aspects of economic behavior; reconciles results from different branches of economics; and employs data that are uniquely suited to answer otherwise unanswerable questions. He has established himself in a few short years as arguably the best applied microeconomist of his generation.”

As an example of Chetty’s work, the AEA pointed to one of his most-cited studies, “Salience and Taxation: Theory and Evidence,” in which he showed that consumers’ purchasing choices are based largely on the posted price of an item, and that sales tax plays little to no role in their decision whether to buy a specific item, contradicting a canonical assumption of theories of taxation.

To conduct the study, Chetty and his co-authors convinced a large retail store to post prices that include sales tax for some items, while continuing to post only pre-tax prices on nearby items. The results showed that posting final tax-inclusive prices led to lower sales.

In another oft-cited paper, Chetty studied the effects of elementary school teacher quality on student test scores and long-term outcomes such as college attendance and earnings by tracking 1 million children from childhood to adulthood. The results showed that better teachers led to a substantially greater likelihood of college graduation and higher earnings.

“The driving motivation behind my research is to try to answer real-world social and economic policy questions using rigorous methods,” Chetty said. “My work uses tools from economics, psychology, and statistics to take a scientific approach to answering policy questions of current relevance.

“There is considerable political debate about whether we should have higher tax rates on high-income people or about how we can improve the American educational system,” he continued. “In my view, one should be able to obtain scientific answers to such questions. For example, take the question of whether taxing the richest Americans at higher rates will significantly reduce the number of jobs in the economy. That question was hotly debated in the last election but ultimately has a ‘yes’ or ‘no’ answer.  I’m in search of data-based answers to such questions, as basing such policies on hard evidence rather than political preference can have very important impacts on millions of people’s lives.”