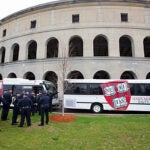 At a celebratory event on Wednesday, the Radcliffe Gymnasium was renamed the Knafel Center in honor of Sidney R. Knafel ’52, M.B.A. ’54, and in recognition of the center’s increasing role in promoting intellectual exchange across Harvard’s Schools and with the public.

Radcliffe supports innovative work in the arts, humanities, sciences, and social sciences through its highly competitive Fellowship Program, its renowned Schlesinger Library on the History of Women in America, and its Academic Ventures program that supports collaborative, faculty-led research projects, as well as public events across all academic disciplines and the creative arts. The Radcliffe Institute is committed not only to the creation of bold ideas, but also to sharing them with a broad, global audience.

Members of the Radcliffe community — including fellows, Harvard students who are research partners with fellows, faculty advisers, librarians, and other staff, as well as members of the Dean’s Advisory Council — gathered in Radcliffe Yard for a surprise announcement by Radcliffe Dean Lizabeth Cohen, the Howard Mumford Jones Professor of American Studies at Harvard.

When Cohen and Knafel stepped onto the steps of the Radcliffe Gymnasium, Cohen announced that the building was being renamed the Knafel Center, “in honor of Sid’s longstanding and outstanding support for the Radcliffe Institute.” His most recent gift establishes the $10.5 million Knafel Fund, which will support programs at the institute that bring together Harvard faculty from across the University and scholars from around the world to work in private seminars and to create public programs.

“It is wonderful, and wonderfully fitting, that the Radcliffe Gymnasium is now the Knafel Center, serving as the center of so much bold and creative work at the Radcliffe Institute and at Harvard,” said Cohen. “We recognize that Sid thinks big and appreciate that with his most recent gift, he is inspiring us all to unite big thinkers across disciplines and boundaries to connect in new ways with one another and the public.”

“Sid was one of the early — and great — supporters of the Radcliffe Institute and is among the University’s most deeply engaged citizens,” said Harvard President Drew Faust, who grew close to Knafel when she was the dean of Radcliffe. “He is passionate about advancing Harvard, about supporting teaching and research, and about investing his resources wisely and well. I am pleased that one of our campus’ beloved spaces will bear his name as a lasting acknowledgement of his thoughtfulness and generosity.”

“It’s a pretty simple proposition for me,” Knafel said of his generosity to and involvement with the institute. “A stronger Radcliffe contributes to a stronger Harvard. A great university needs a place where thinkers from across its campus and around the world come together to take risks, explore new ideas, and connect theory and practice. At Harvard, the Radcliffe Institute is that place.”

The building formerly known as the Radcliffe Gymnasium is the center of that activity. Built in 1898 for Radcliffe College, and most recently renovated in 2005 for the Radcliffe Institute (which was founded in 1999), the Knafel Center will undergo external renovations this summer.  The first-floor conference rooms host intensive seminars led by Harvard faculty and former Radcliffe fellows that convene a diverse array of faculty, scholars, artists, and experts to launch research initiatives, publications, and public policies. Recent seminars include “Securing the Place of Organized Civil Society in Emerging Arab Democracies,” “A New Multidisciplinary Approach to Data Understanding: Integrating Human and Computational Approaches,” and “Human Rights to Water and Sanitation: From Theory to Practice.”

The  second-floor auditorium is home to thought-provoking events that are free, open to the public, and often webcast live, such as recent lectures by NPR journalist Melissa Block ’83, prominent historian Anthony Grafton, and theoretical physicist Lawrence M. Krauss, and the upcoming “Crossing Borders: Immigration and Gender in the Americas” concert and conference.