Putting the stars within reach 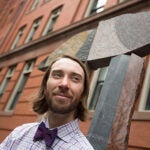 From Chandra staff, an inviting guide to the cosmos

When you look at the night sky, you see stars, a few planets, and perhaps even the Milky Way’s spangled belt stretched across the middle.

Farther off, visible only through telescopes: distant galaxies and star-birthing nebulae, planets circling other suns, exploding supernova that create the very elements in our bodies.

All these marvels and more are out there, and Kimberly Arcand and Megan Watzke want to tell you about them.

The two, communications specialists for the Chandra X-Ray Observatory, a space telescope based at the Harvard-Smithsonian Center for Astrophysics’ Smithsonian Astrophysical Observatory, have completed what they describe as a travel guide to the universe, a place of wonder that you shouldn’t need a Ph.D. to understand. After all, they say, the cosmos belongs to us all.

“Nobody owns the universe, we all look up at the night sky,” Arcand said.

Written in accessible language, with pop culture references and compelling images, the book aims for the sweet spot between dry astrophysics tomes and too-frothy coffee-table books of pretty pictures. “Your Ticket to the Universe: A Guide to Exploring the Cosmos” incorporates everything from baseball to van Gogh to explain things like the electromagnetic spectrum and interstellar dust clouds.

The tour starts at home, exploring Earth and the life that makes it special, stopping at impact craters, remote lakes, and blue holes, and then heads off to examine the most striking objects in our sky, the sun and the moon.

After checking out the moon’s dark side and the sun’s many moods, the two take you planet-hopping through the solar system, working their way from fiery Mercury out to blue Neptune, lingering a bit at poor, demoted Pluto and its Kuiper Belt, and then visiting several of the solar system’s most interesting moons.

The book stems from a project Arcand and Watzke undertook for the International Year of Astronomy in 2009: a digital repository of images and explanations that people around the world could download to create their own public astronomy exhibits. Those exhibits eventually were displayed in some 1,000 sites around the world, Arcand said, and articles the pair wrote about the project caught the eye of a literary agent.

The book, out this month, takes about half of its images from the project, with the others taken from other sources. Arcand and Watzke have complementary roles in their day jobs, with Watzke serving as press officer and Arcand as media coordinator for Chandra. Their roles not only expose them to the latest stellar images, they also require them to explain in plain English the images’ scientific significance.

While the book highlights our current understanding of the universe, it aims to avoid leaving the impression that all, or even very much, is known, Arcand said. In fact, with recent discoveries that dark matter and dark energy make up some 95 percent of the universe, the opposite is true.