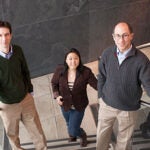 The prevalence of malaria in the population on the Tanzanian island of Zanzibar has fallen to just 2 percent from 70 percent over the last century. Much of the progress came in just the last 10 years, leading to a new challenge: how to sustain eradication efforts now that the disease has become relatively rare.

Jessica Cohen, assistant professor of global health at the Harvard School of Public Health (HSPH), was part of a team brought to Zanzibar to help the government determine a path to control malaria in the future, either by maintaining the present low level or by pushing forward with eradication efforts.

The nature of malaria makes eradication extremely difficult, Cohen said. The disease can lie dormant in the liver for years, breaking out after control efforts have eased. The ability of the mosquitoes that carry the parasite to bite a number of people means that one case can lead to many others — and that means efforts that fall short of eradication, even if they come very close, may be reversed in short order.

Cohen’s analysis of Zanzibar said that the disease would be eliminated in five years if everyone on the island, which is home to more than a million people, slept under bed nets. If just 65 percent used the nets — a high compliance rate — eradication would take 22 years.

“These gains can be erased in months,” Cohen cautioned.

Cohen was one of several speakers Friday at the HSPH symposium “Defeating Malaria: From the Genes to the Globe.” The event was the first in a series examining public health problems whose solutions will require large-scale, multidisciplinary efforts. Another symposium will deal with nutrition issues from starvation to obesity, and another will look at aging.

Event organizers also announced an associated fellowship that will support a student’s travel to a field research site.

Marcia Castro, associate professor of demography at HSPH, outlined the challenges facing the scientific and public health communities working to eradicate malaria. A major problem is the hidden reservoir of disease. Though malaria’s presence is normally marked by a high fever, some cases are symptom-free, meaning that people who otherwise appear healthy can help spread the disease. Another problem is the parasite’s dormancy in the liver. Together, Castro said, that means robust surveillance systems will be critical to containing new outbreaks.

Other problems include drug resistance, donor fatigue, and maintaining the political commitment to continue fighting the illness. In cases like that of Zanzibar, when the disease is at very low levels it may be hard to convince donors to continue giving and governments to continue programs that target the disease.

Günther Fink, assistant professor of international health economics at HSPH, said the efforts ultimately will prove worthwhile. Malaria has significant direct costs stemming from treatment. The indirect costs are also considerable, with premature deaths, time lost from work — estimated between six and 15 days a year per infected person — and reduced productivity from fatigue and anemia once people do return. He cited a 2001 study that indicated economies grow an average of 1.3 percent slower in malaria-endemic countries than in non-malaria countries.

The high cost means that investment in prevention measures such as bed nets makes good financial sense, Fink said. He estimated the cost of treating villagers in a typical 600-person community at $900 a year, compared with $750 to take preventive steps such as buying the nets, with a return on investment of 20 percent. That doesn’t even consider lives saved — at typical mortality rates, two people would be expected to die in the village each year — and increased productivity from better health.

Other participants discussed other challenges, including genetically modified mosquitoes; the different characteristics of the second-most widely spread malaria parasite (six infect humans) that may make the disease difficult to eradicate; the biology of the disease’s transmission; and the opportunities presented by the rapid decline in the cost of gene sequencing.

Daniel Neafsey, group leader of malaria genome sequencing and analysis at the Broad Institute of the Massachusetts Institute of Technology and Harvard, said the parasite and the mosquito have a lot of genetic variability, which provides a reservoir of genetic characteristics to circumvent scientists’ efforts. The variability presents a problem to vaccine design.

The advent of cheap gene sequencing may provide new opportunities to understand and fight the disease.