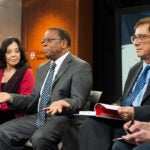 The cost of doing nothing

Researchers at the Harvard Stem Cell Institute (HSCI) have discovered a hormone that holds promise for a dramatically more effective treatment of type 2 diabetes, a metabolic illness afflicting an estimated 26 million Americans. The researchers believe that the hormone might also have a role in treating type 1, or juvenile, diabetes.

The work was published today by the journal Cell as an early online release. It is scheduled for the May 9 print edition of the journal.

The hormone, called betatrophin, causes mice to produce insulin-secreting pancreatic beta cells at up to 30 times the normal rate. The new beta cells only produce insulin when called for by the body, offering the potential for the natural regulation of insulin and a great reduction in the complications associated with diabetes, the leading medical cause of amputations and non-genetic loss of vision.

Since the publication of this story, there have been questions raised about some of the conclusions reached by the researchers. The authors of the study wrote this clarification that was published as a Perspectives piece in the journal Cell.

The researchers who discovered betatrophin, HSCI co-director Doug Melton and postdoctoral fellow Peng Yi, caution that much work remains to be done before it could be used as a treatment in humans. But the results of their work, which was supported in large part by a federal research grant, already have attracted the attention of drug manufacturers.

“If this could be used in people,” said Melton, Harvard’s Xander University Professor and co-chair of the University’s Department of Stem Cell and Regenerative Biology, “it could eventually mean that instead of taking insulin injections three times a day, you might take an injection of this hormone once a week or once a month, or in the best case maybe even once a year.”

Type 2 diabetes, a disease associated with the national obesity epidemic, is usually caused by a combination of excess weight and lack of exercise. It causes patients to slowly lose beta cells and the ability to produce adequate insulin. One recent study has estimated that diabetes treatment and complications cost the United States $218 billion annually, or about 10 percent of the nation’s entire health bill.

“Our idea here is relatively simple,” Melton said. “We would provide this hormone, the type 2 diabetic will make more of their own insulin-producing cells, and this will slow down, if not stop, the progression of their diabetes. I’ve never seen any treatment that causes such an enormous leap in beta cell replication.”

Though Melton sees betatrophin primarily as a treatment for type 2 diabetes, he believes it might play a role in the treatment of type 1 diabetes as well, perhaps boosting the number of beta cells and slowing the progression of that autoimmune disease when it’s first diagnosed.

“We’ve done the work in mice,” Melton said, “but of course we’re not interested in curing mice of diabetes, and we now know the gene is a human gene. We’ve cloned the human gene and, moreover, we know that the hormone exists in human plasma; betatrophin definitely exists in humans.”

While Melton was clear about the need for more research before the hormone could be available as a drug, he also said that betatrophin could be in human clinical trials within three to five years, an extremely short time in the normal course of drug discovery and development.

Working with Harvard’s Office of Technology Development, Melton and Yi already have a collaborative agreement with Evotec, a German biotech firm that now has 15 scientists working on betatrophin, and the compound has been licensed to Janssen Pharmaceuticals, a Johnson & Johnson company that now, too, has scientists working to move betatrophin toward the clinic.

But were it not for the federal funding of basic science research, there would be no betatrophin. A Melton proposal titled “Searching for Genes and Compounds That Cause Beta Cell Replication” impressed National Institutes of Health grant reviewers, and received federal funding for 80 percent of the work leading to the discovery of betatrophin.

“At a time of great uncertainty for federal research funding, the discovery of betatrophin is a reminder of the importance of basic research,” said Harvard Provost Alan Garber. “Were it not for a National Institutes for Health grant, this promising new approach to treating diabetes might never have come to light.”

As is often the case in basic science research, serendipity played a role in the discovery of betatrophin, which Melton and Yi originally called Rabbit because they discovered it during the Chinese Year of the Rabbit, and because it makes beta cells multiply so quickly.

For more than 15 years the major focus of Melton’s work has been not type 2 diabetes but the less common type 1, or juvenile diabetes, which he began focusing on when his son was diagnosed with it as an infant. (The disease later was also diagnosed in his daughter.) Additionally, most of Melton’s work has involved using stem cells, the fundamental building blocks of all human organs, as disease treatments and targets for drug discoveries. But stem cells played no direct role in the discovery of betatrophin. It was, rather, a classic example of scientists with sufficient resources asking questions, and pursuing answers, that fell outside the usual scope of their laboratories and institutes.

“I would like to tell you this discovery came from deep thinking and we knew we would find this, but it was more a bit of luck,” explained Melton, who in addition to his roles at Harvard is a Howard Hughes Medical Institute investigator. “We were just wondering what happens when an animal doesn’t have enough insulin. We were lucky to find this new gene that had largely gone unnoticed before.

“Another hint came from studying something that people know about but don’t think much about, which is: What happens during pregnancy?” he said, “When a woman gets pregnant, her carbohydrate load, her call for insulin, can increase an enormous amount because of the weight and nutrition needs of the fetus. During pregnancy, there are more beta cells needed, and it turns out that this hormone goes up during pregnancy. We looked in pregnant mice and found that when the animal becomes pregnant this hormone is turned on to make more beta cells.”

Melton and Yi have been working on the project for more than four years. But the big breakthrough came on Feb. 10, 2011. “I was just sitting there at the microscope looking at all these replicating beta cells,” said Yi, and he could barely believe his eyes. He said he never had “seen this kind of dramatic replication.”

At first unsure whether to repeat the experiment or to tell Melton right away, Peng said he rushed into Melton’s office, printed out the image he was seeing, and showed it to Melton, telling him they probably had a breakthrough. “I showed him this picture and told him this is a secreted protein, and he was really, really excited about this result.”

“But in this test,” he continued, “any cell that was dividing would shine up bright and white, like a sparkle. He showed me this picture where the whole pancreas is largely black, but then there were these clusters, like stars of these white dots, which turned out to be all over the islets, the place where the beta cell sits. I still keep that black-and-white picture. We have much fancier color ones, but I like the black-and-white picture, because it’s one of those moments when you know something interesting has happened.  This is not by accident. I’ve never seen any treatment that causes such an enormous leap … in beta cell replication.”

The following morning, when Yi sat down at his lab bench, there was a formal-looking, cream-colored envelope lying on the brown surface of the bench. He opened it up, and took from the envelope a handwritten note from Melton. It read:

“Dear Peng, I can hardly sleep — I am so excited by your result. It’s a tribute to your hard work and hard thinking. Can’t wait to see the data from the repeat. Doug.”