On Tax Day, a step toward equality 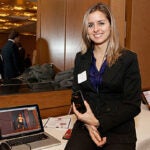 Imagining impact, and believing in it

When Arthur Patton-Hock was honored for 25 years of service to Harvard during a reception in 2010, he was treated no differently than any of the other faculty and staff members with whom he shared the honor. He brought his family, introduced his husband to co-workers at the Charles Warren Center and the American Civilization/American Studies Program (he is administrative director for both), and was thanked by President Drew Faust for his commitment.

“I was touched,” said his husband, Kevin Patton-Hock, a full-time parent to the couple’s two sons, 11 and 13. “I thought it was really nice, and just a beautiful thing to see everyone treated the same.”

But as a gay married couple, there was always one day where the Patton-Hocks were not treated just like every other Harvard family: Tax Day, when they faced additional federal taxes on their health coverage that heterosexual married couples do not.

“Harvard’s been a wonderful employer to me,” Arthur Patton-Hock said. “It’s only at the moment of benefits-election time or tax-preparation time that the inequity rankles.”

This year, thanks to a change in Harvard policy, more than 100 married couples like the Patton-Hocks will have that cost offset by the University — an important step in advancing equity for LGBT employees, advocates say.

Under current federal law, any worker enrolled in an employer-sponsored medical plan who extends that coverage to a same-sex spouse is taxed on the fair market value of the spouse’s medical coverage. Although eight states and the District of Columbia now allow same-sex marriage, the 1996 Defense of Marriage Act prohibits the federal government from recognizing those unions for tax purposes.

Under a new policy announced today and effective this month, Harvard will provide a tax equalization payment of $1,500 a year to eligible faculty, staff, and internal postdoctoral fellows whose same-sex spouse (or, for employees living in states where same-sex marriage is not legal, same-sex domestic partner) is covered under one of the University’s family medical plans.

“The unequal tax treatment of health benefits under federal law has been troubling to many LGBT employees at Harvard as a matter of equity with other families,” Moore said. “I’m pleased that, like a growing number of other employers, we’re providing this payment to help offset extra taxes paid by employees who cover a same-sex spouse.”

Eligible employees are automatically enrolled and will receive the new benefit in monthly payments of $125, the first of which should appear on employees’ paychecks in May. (The amount will be $166.66 per month for employees who are paid only nine months a year, such as dining services workers.)

Harvard joins a growing number of major employers, including the city of Cambridge, that have adopted similar policies in recent years, in part to remain competitive in attracting LGBT employees.

“This policy will help Harvard attract the best talent,” said Michael Goetz, a Harvard Divinity School employee and past co-chair of the Harvard LGBT Faculty and Staff Committee. “But what it comes down to for me is, it’s the right and just thing to do. Harvard’s seen as a leader in the higher-education world, and it’s a place whose leaders are concerned with doing the right thing.”

Harvard has been considering a policy change since last August, said Charles Curti, director of human resources at the Radcliffe Institute for Advanced Study. After a study of other institutions with similar policies, HHR determined that a uniform payment would be the most effective way to reimburse same-sex married couples.

“Everyone across the University was very supportive of the concept,” said Curti, a member of Harvard’s gay community who worked on the policy’s drafting and implementation. “There’s been a strong desire on the part of the LGBT community to have this come to pass.”

The constitutionality of the Defense of Marriage Act was argued before the Supreme Court last month, and the court is expected to rule on the issue in June. If the law is overturned, Harvard’s new tax equalization policy could become irrelevant, as the federal government would likely no longer tax same-sex married couples differently than their heterosexual counterparts.

“We still don’t know how the Supreme Court is going to rule,” Curti said. “Harvard can’t repeal that law, but it can look to mitigate some of the impact of this legislation. … To me, it’s a sign of Harvard’s commitment to diversity and inclusion.”

Harvard’s decision to move forward as the law hangs in the balance is also a show of good faith to the LGBT community, the Patton-Hocks said.

“I think it’s great that the University is doing it now, because it needs to be done, and I’m very glad that the University isn’t waiting for the Supreme Court decision,” Arthur Patton-Hock said. “It’s important to indicate to LGBT employees that we value you equally in all respects and are going to make it right regardless of what the court decides.”

Of course, there are practical benefits to the new policy as well.

“We’re a family for whom the money will make a difference,” Kevin Patton-Hock said. “We have a million things we could use that for — for our kids mostly.”