Not as evolved as we think 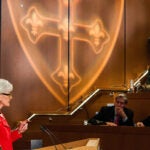 Lest you think you’re at the top of the evolutionary heap, looking down your highly evolved nose at the earth’s lesser creatures, Marlene Zuk has a message for you: When it comes to evolution, there is no high or low, no better or worse.

From evolution’s standpoint, people are no more special than microbes evolved to survive in extreme surroundings that might kill mere humans.

Zuk, a professor of ecology, evolution, and behavior at the University of Minnesota, took aim Wednesday evening at popular misconceptions of evolution, the human kind in particular. The biggest misconception, she said, is that the process is linear, with a beginning and an end, and that human evolution is progressing somehow from worse to better.

Evolution, rather, is the continual adaptation of organisms to their surroundings. When the surroundings change, those life forms poorly adapted to the new environment perish, while those it suits survive.

“There is no ‘progress’ in evolution. No living thing is trying to get anywhere,” Zuk said. “And humans are not at the pinnacle of the evolutionary ladder.”

She also took aim at the notion that anything is ever “perfectly adapted” to its environment. Evolution, she said, is no engineer, building the perfect organism from scratch every time the environment changes. Rather, evolution is the ultimate tinkerer, always having to make do with the parts on hand. Its creations tend to be imperfect, just fit enough to survive.

Zuk, the author of a new book on the subject, “Paleofantasy: What Evolution Really Tells Us About Sex, Diet, and How We Live,” spoke at the Harvard Museum of Natural History (HMNH) as part of its “Evolution Matters” lecture series. Zuk was introduced by Jane Pickering, executive director of the Harvard Museums of Science and Culture, of which the HMNH is part.

Zuk cast a jaundiced eye on the modern nostalgia for our rugged caveman days, saying that the idea that we were somehow “perfectly adapted” then isn’t true — just a “paleofantasy” — and neither is the idea that we haven’t evolved since and are somehow ill-suited to life today.

Those supposedly “perfectly adapted” cavemen were evolutionary compromises, just good enough to survive and pass their genes to the next generation. They might themselves have been nostalgic for the days when ancestors ran about on all fours, since walking upright can cause back pain, Zuk said. Or they might have bemoaned all the effort required to hunt for a living, longing to return to the days when humans scavenged other animals’ kills.

“Why stop there? Why not long to be aquatic, since life arose in the sea?” Zuk said. “All living things are full of compromises. We’re jury-rigged.”

The idea that our physical traits somehow make us better fitted to the ancient savannahs of Africa than to the demands of modern society is widespread in popular culture, Zuk said. It is evidenced in everything from the popular “Paleo diet,” whose adherents only eat foods a caveman might, to the rise of barefoot running, to explanations of the obesity crisis, and of our darker emotions and desires.

Zuk illustrated her point with images from popular culture, showing a Glamour magazine cover offering “A Cavewoman’s Guide to Good Health,” a New York Times article about New Yorkers who model their lives on cavemen — giving blood regularly to mimic blood once lost in battle — and several versions of a common cartoon showing human evolution as a progression from chimpanzee to caveman to well-muscled, anatomically modern man to office slouch, hunched over a computer, or tubby, balding guy munching on a sub sandwich.

Human evolution is still happening, Zuk said. Researchers examining data from the Framingham Heart Study, which began in 1948, detected a large enough signal in the 14,000 study subjects to predict that, 10 generations on, women will be shorter, plumper, with lower cholesterol and blood pressure.

“Selection is continuing in our lives, as it was in our ancestors’,” Zuk said.

There are other instances of recent human evolution, including the evolution of lactose tolerance in herding populations in Africa and Europe. Most mammals lose the enzyme lactase, which confers the ability to digest dairy, as they mature. But in these populations, the continued ability to use a readily available food source must have conferred enough added fitness for the gene to spread. And an increase in fitness doesn’t have to be large, Zuk pointed out, to have a significant impact over long periods of time. Just a 3 percent fitness increase would result in a gene becoming widespread in a population in some 300 to 350 generations, a relative blink in evolutionary time.

“Nobody heaves a sigh of genetic relief and then stops,” Zuk said. No life form can say, “OK, we’re not evolving. We can all now learn to knit.”