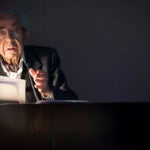 Isaacson deconstructs their genius and dedication to larger goals

In the spring of 1974, Walter Isaacson sat in Harvard’s Memorial Church and listened to the Rev. Peter J. Gomes offer graduating seniors his parting words of wisdom.

The address, recalled Isaacson, a history and literature concentrator and now a best-selling biographer, was titled “What We Forgot to Tell You.” “It’s not all about you,” Gomes told the students, Isaacson recalled. “In the end, you are going to figure out it’s about being part of something larger than yourself.”

That understanding that they were part of a wider world was paramount for three famous men about whom Isaacson went on to write books: founding father Benjamin Franklin, physicist Albert Einstein, and, most recently, Apple guru Steve Jobs. On Monday at the Radcliffe Gymnasium, Isaacson explored the genius of the three transformative men, unraveling both their intellectual brilliance and their common desire to help change the world. Isaacson’s talk, the 2013 Maurine and Robert Rothschild Lecture, was sponsored by Harvard’s Department of the History of Science.

In 2011, when Jobs finally knew he wasn’t going to beat the pancreatic cancer he had suffered with for years, Jobs told Isaacson he had come to realize that history, the history of creativity, the history of technology, is like a river from which you can take things. But in the end, what’s most important, Jobs said, “is what you put back.”

What Jobs gave back to the world was a revolutionary new way to engage with it: sleek personal computers, phones, and media players that made music, photos, and the Internet available with the touch of a finger. Jobs’ genius, said Isaacson, lay in his meticulous eye, his passion for perfection, and his abiding belief that beauty and technology weren’t mutually exclusive, but inherently intertwined.

Isaacson, who also heads the Aspen Institute, conducted close to 50 interviews with Jobs over two years, and spoke with both the entrepreneur’s devotees and detractors for his book. He heard how Jobs convinced his company to delay the release of Apple’s Macintosh personal computer so the employees could rework its circuit board, a concealed part that users would never lay eyes on. The fault, Jobs said, was that “it wasn’t beautiful.”

When it came time to sheath the iPhone, Jobs didn’t want plastic, he wanted a smooth, silky, strong, and scratch-resistant glass. After an exhaustive search, he enlisted Corning to make its famed Gorilla Glass, which until then had existed only as a concept and a formula.

Jobs, said Isaacson, was the “American creation myth writ large, somebody who had created a company in his parents’ garage in a middle-class suburb with a chubby kid from down the street, and transformed it into the most valuable company in the history of the world; and he did it by believing beauty and design matter.”

In search of that beauty, Jobs endlessly frustrated his employees, but he also drove them to “do things they never realized that they were able to do,” added Isaacson.

While exploring Henry Kissinger’s adherence to realpolitik for a 1992 biography about the former secretary of state, Isaacson said he began to look for the roots of realism in American foreign policy and “stumbled across Benjamin Franklin.”

Franklin, renowned in part for his groundbreaking work on electricity, possessed an insatiable curiosity, an “intuitive feel for the spirit and the laws of the universe,” and a joy in the beauty of science, but he also possessed something else: an appreciation of the “utility of science.”

Similar to Jobs, Franklin wanted to find ways to put his discoveries to use to help better the world, Isaacson said. But Franklin, in addition to shaping the course of history with his science experiments, helped to change the world in his capacity as a skilled and savvy statesman, relying on his grounding in scientific method to bridge political divides. Isaacson explained Franklin’s thinking in “Benjamin Franklin: An American Life” (2003).

“I realized that at the root of Franklin’s creativity and this notion of balance,” said Isaacson, “was an appreciation of science.

“It was because, whenever there was a dispute in the colonial period that he was involved in,” he added, “Franklin would say, ‘Let’s look at the evidence, let’s be driven by the facts.’”

Another great man obsessed by empirical evidence was Albert Einstein, the subject of Isaacson’s biography “Einstein: His Life and Universe” (2007).

Isaacson wanted to make Einstein accessible to the public and convey not just his brilliance, “but the beauty of his creativity.” Isaacson said that beauty manifested itself in Einstein’s “visual thought experiments,” his ability to visualize complicated concepts. Those vivid images “would make him the greatest scientist of his century,” said Isaacson, particularly when he “tried to picture what it would be like to ride alongside a light beam.”

A version of that image ultimately led the German-born theoretical physicist, at the time a third-class examiner in the Swiss patent office tasked with reviewing patent applications for methods to synchronize the country’s clocks, to a groundbreaking analysis of the concept of time.

Einstein thought “if you are traveling really, really fast toward one of the clocks, what seems simultaneous to you will not be simultaneous to somebody who is traveling really, really fast to the other clock in the other direction. What Einstein figures out … is that, yes, the speed of light is always constant, but time is relative depending on your state of motion.

“So it’s just these visual thought experiments of the imagination,” Isaacson said, “that lead to these great theories.”

But Einstein, like Jobs and Franklin, knew his work would do more than merely satisfy his own curiosity. He also understood that he was part of something greater than himself.

“Einstein called that ‘a spirit manifested in the laws of the universe,’ a spirit in the face of which we must be humble because we know it’s so much larger than we are. And our role, he said, is to somehow touch that spirit … and get us a step closer to it.”

Isaacson described how Einstein scribbled down nine pages of equations as he lay on his deathbed. Finally, the handwriting trailed off to the edge of the page, “as he was just writing one last line of the equations that he thought would get him — but also the rest of us, because he wasn’t going to be here — one step closer to that spirit. … That’s what the history of science teaches us. That’s so important, especially nowadays when we live in a world in which it would be helpful to be reminded every step of the way that we are part of something so much larger and more beautiful than ourselves.”

Isaacson said his next book, devoted to the notion of what he called collaborative creativity, will focus on a group of people who helped to usher in the digital age and together created the computer. Teams of engineers, theoretical physicists, mathematicians, mechanics, and material scientists conducted the pioneering work.

“That notion of all these people being thrown together is, to me, the essence of true creativity, especially in the sciences.”

Isaacson, who is also a member of Harvard’s Board of Overseers, praised the University for embracing that spirit of collective creativity and for supporting efforts like undergraduate work in teams, cross-disciplinary research, and networked and innovative approaches to teaching and learning.

The history of science in the 21st century will likely be dominated not by “lone geniuses,” said Isaacson, but by collaboration and by “collective, applied imagineering.”