Insignificant, with a lousy future 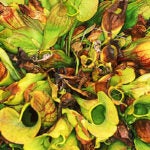 Lawrence Krauss wants you to understand two things about yourself and your place in the cosmos. First, you are even more insignificant than you may have believed. Second, the future is cold, dark, and lonely.

Krauss, a noted theoretical physicist from Arizona State University, brought his brand of popular science to the Radcliffe Institute for Advanced Study on Thursday, addressing a crowd of 200 gathered in the Radcliffe Gym for a talk that was often humorous despite dealing with subjects that can be dry and technical.

Krauss is the author of 300 scientific articles and several books, including titles aimed at the general public such as 1995’s “The Physics of Star Trek,” and 2012’s “A Universe from Nothing.” Krauss was introduced by Radcliffe Dean Lizabeth Cohen and Professor of Astronomy Dimitar Sasselov.

Krauss, who said satire and ridicule are important because they get people to think, poked at religious creation myths and science-averse politicians. He also explained the current understanding of the cosmos, saying that dark energy and dark matter make up almost everything in it. He said that means all the solid matter we can see is just a small percent of the universe, making us even less cosmically important than we’d believed.

“You are more insignificant than you ever thought you were,” Krauss said. “The dominant energy in the universe resides in empty space.”

Astronomers now believe the universe will continue expanding forever, which led Krauss to paint a bleak picture of the distant future, perhaps 2 trillion years from now. By that time, the galaxies will be so far apart that it will appear that our Milky Way is alone and, as the stars run out of fuel and wink out, the universe will become cold and dark.

Krauss said that when faced with the universe, human imagination fails. Even nothing isn’t what it seems, he said. The apparent vacuum of space, he said, is a boiling mass filled with unknown particles appearing and disappearing too fast to be detected.

He drew a parallel with the interior of a proton, which is made up of three quarks. But the quarks only account for 10 percent of its mass. The rest is made of unknown particles popping in and out of existence, he said. There are even other types of possible “nothing,” including one where time and space pop in and out of existence.

“Nothing is a very interesting thing in physics,” Krauss said.

In the end, he said, we in a lucky time, when the universe hasn’t yet succumbed to its expansion and gone dark, taking with it any evidence of the Big Bang. Instead, the night sky is alive with stars and distant galaxies so that, in studying them, we can understand the universe better.

“You’re insignificant, and the future is miserable,” Krauss said. “Instead of being depressed … we should enjoy our moment in the sun.”