In search of sacred spaces 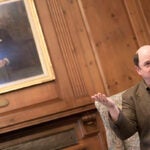 In a video from Burning Man, the quirky Nevada desert festival, a naked man rides past on a bicycle. A woman in sunglasses wears a hat that looks like a salad. A lean young man comments on the festival at large: “This is the ultimate expression of human nature.”

In another video, this one of a windswept English coastline at night, dozens of lighted tents glow near the ruins of a castle. People stroll reverently around, like worshippers in an outdoor church.

Can temporary public space have a spiritual dimension? If so, what is the role of the artist in creating it?

Those questions were at the heart of “Sacred Spaces,” a public conversation between installation artist Helen Marriage and Rahul Mehrotra, professor of urban design and planning at the Harvard Graduate School of Design (GSD). The March 29 event was part of a series of such conversations on creative disruptions to daily urban life, a specialty of Marriage, who is a Loeb Fellow this year. Such disruptions, she said, often have a spiritual dimension, even in an increasingly secular age.

Marriage is co-founder of Artichoke Trust, a London-based producer of large-scale events designed to break the arts out of theaters and galleries. She helped to design Peace Camp, the eight-site 2012 installation of glowing tents, including one at Dunstanburgh Castle in Northern England.

The installation — “a refugee camp from heaven,” said Marriage, quoting an observer — prompted non-religious yet spiritual feelings. “Tonight, although we are faith-less,” one man said in a video shown at the talk, “truth enters our heart.”

Mehrotra is an architect and theorist of informal public space. He attended part of this year’s Kumbh Mela, a 55-day spiritual gathering held at the confluence of India’s holy rivers. This transitory religious city is a tradition thousands of years old.

His students study the Kumbh in class, said Mehrotra, and Burning Man, too. The first involves millions of people of all ages, has ancient beginnings, and, as a gathering of Hindus and Buddhists, has explicit religious underpinnings. Burning Man is fewer than three decades old, attracts a demographic that is largely “young and good-looking,” and is capped at 50,000 people. The participants’ main religion, if you stretch the concept of organizing the sacred, seems to be a celebration of transitory communalism and eccentric forms of self-reliance.

“These temporal landscapes exist in every society,” said Mehrotra of transitory public spaces. He used the example of the urban American farmers market, a temporary setting for commerce. “I’d never seen a farmers market,” said Mehrotra, who grew up in India, but he remembers thinking, “My God, all of Mumbai is like this.”

Such places have “a retrospective charm,” he said, and they illustrate human beings’ universal need “to organize themselves … by jumping protocols.” Mehrotra has studied urban places that seem to defy orderly conventions. He calls them kinetic cities, vibrant urban centers that seem in constant motion and that are in tension with the static cities portrayed in maps and monuments.

But are such transitional places sacred? Not always, he said, though the Kumbh certainly is. And are they always creatively disruptive, as Burning Man is, and as Marriage strives to be as an artist? Not always that, either, said Mehrotra. For one, the Kumbh is not disruptive, but very orderly and controlled, “a counterpoint to our urban life in India,” he said, and while it exists the cleanest city in the country, with the best trash pickup and the best access to social services.

The audience of 40, squeezed into Knafel 354, soon chimed in — partly in defense of Burning Man. For all its apparent disruption, it’s orderly and clean, said one veteran of the Black Rock Desert event. “You’re practicing for utopia.”

Marriage reached for a parallel between Burning Man and the Kumbh. “People do the same thing. They take their clothes off. They paint their bodies.”

Yes, both events share “an aesthetic of the temporal,” said Mehrotra, and both are elastic in the ways they counter urban norms. Both refuse to incorporate meaning in fixed structures. (The Kumbh is a temporary city of tents. Burning Man is the same, and the “temple” erected there every year is ritually burned.) Both offer a way to “break away from an overwhelmingly organized life,” he said, but they also take care. “We all have to be careful of universalizing the relevance of something.” For instance, said Mehrotra, the Kumbh is not — as Burning Man is — a place where “you can choose your own adventure.” It’s a city of religious enclaves, each ruled by a guru or leader.

Finding relevance, even a kind of sacredness, in public space captivates Marriage. “It might not be universality,” she said in answer to Mehrotra. “But it’s still that transformation to something else.”

Artists can help to set the tone, she said, as with the illuminated tents. And a carefully chosen site can help, by recovering lost feelings of the sacred. The installation in seaside Northern England, for one, resonated with both history (a 14th century castle) and nature (the crashing sea and waving grasses). “Some days, although we cannot pray,” a voice says in the tents video, “the prayer utters itself.”

These and other temporary installations are antidotes to “the frantic nature of life,” said Marriage. “They connect back with spiritual space, even though it is not about spirituality.”

Something akin to a spiritual experience can be had in a space like that created by the illuminated tents, said Marriage, and through other “strange moments” arranged by artists. One of those was the Lumiere festival that she and others at Artichoke Trust created in 2011. It transformed Durham, a cash-poor medieval English city, into a temporary setting of fairytale lights, with 35 installations meant to evoke history, wonder, and hope.

“We want to change people’s feelings about themselves in the world,” said Marriage. Her group will try the same transformation this fall in Derry-Londonderry, Northern Ireland, an edgy, religiously divided city.

In that case, the creation of something both civic and sacred will be a special challenge, and could even be dangerous. “It’s the only city in Europe with intact city walls,” she said, which are an expression of religious divisions that not long ago were routinely violent. “I want to change the norm.”

The Derry project is “a controlled experiment,” said Marriage, intended “to bring a moment of peace to a very fragmented population. … We hope that something new and good will come out of it.”

Is public art of this kind, reaching for the sacred, sort of a new religion? Marriage was openly tempted by the idea. In the end, the concept is not so different from the Kumbh — a seemingly chaotic break from the norm that within has order. “The disruption we love to create,” and that may inspire near-sacred moments, said Marriage, “is very controlled.”

“The Power of Cultural Disruption” continues with “Streets of Gold,” featuring Ben Cameron, program director for the arts at the Doris Duke Foundation, and Anita Contini, head of the arts at Bloomberg Philanthropies. The talk will be held April 5, 1:15-3 p.m., at the Graduate School of Design in room 111. “City in Flux” concludes the series on April 12.