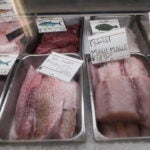 For a couple of hours last Wednesday, a strange, smoky scent took over the Winthrop Junior Common Room. But it wasn’t a fire in the making — just a case of plump eggplants being slow-grilled one by one, an old standby of Greek home cooks.

“We like strong, pungent flavors, and we like that charcoal smokiness in food,” said Diane Kochilas, an authority on Greek cuisine and author of more than 20 cookbooks, as she flipped an eggplant on a gas burner.

Kochilas advised her audience on how to check for doneness: When the densest part of the eggplant, near the stem, is soft, the entire thing will be cooked through. After letting the eggplant cool, she cut it down the middle, then scraped out its flesh.

“I’m a Greek mother,” she explained later, “which means I want to feed everyone the Mediterranean diet.”

Thanks to recent medical findings, she’s hardly alone in that cause. In addition to her demonstration, Kochilas also sat down for a conversation in Eliot House with Frank Sacks, a Harvard School of Public Health (HSPH) expert on nutrition, Wednesday afternoon and gave a lunchtime talk at Dudley Café on Friday.

The events were designed to capitalize on growing interest in the Mediterranean diet, an eating pattern high in fruits, vegetables, beans, and fish, and healthy fats from olive oil and nuts — and a beloved way of life in Kochilas’ ancestral Greece. The findings of a recent University of Barcelona study published in February in the New England Journal of Medicine were unusually conclusive in showing the diet’s health benefits over the low-fat diet that doctors typically recommend for patients at risk of heart attack and stroke.

But as Kochilas and other lovers of eggplant, tahini, and a drizzle of extra-virgin olive oil are all too aware, the diet is still a mystery to many Americans.

Kochilas’ visit was sponsored by the Food Literacy Project at Harvard University Dining Services (HUDS), which has been working with her since last summer to bring authentic Greek foods to Harvard’s dining halls, said Crista Martin, HUDS director for marketing and communications.

“Our menu is already very rich in fruits and vegetables, whole grains, and lean proteins,” Martin said. “But sometimes it’s fun to bring a different view on that. Diane’s recipes certainly embody many of the teachings of the School of Public Health, but she also brings authenticity.”

The recent Mediterranean diet study is hardly the first piece of nutritional research to make its way onto a Harvard menu. HUDS frequently works with HPSH researchers and doctors to improve the healthfulness of its offerings, Martin said. For example, Sacks recently did training with dining staff members to see how much salt they truly needed to add to their recipes to enhance flavor. The lessons from that exercise, along with HUDS’s decision to swap its regular salt for a diamond crystal salt, have led to a reduction in sodium in some HUDS offerings.

The Mediterranean diet study, however, has drawn more attention than any nutrition research in recent memory, said Sacks, professor of cardiovascular disease prevention at HSPH and a professor of medicine at Harvard Medical School, in his conversation with Kochilas and a small group of students.

“The timing was certainly right. People are interested,” he said. “And also, the science of that study was very good. It showed reduced heart disease, reduced strokes, and reduced heart attacks in fairly unhealthy people.”

Though most of their audience was a few decades shy of worrying about heart disease, Sacks stressed that the diet’s benefits extend beyond prevention.

“Older people really can get a benefit in 30 days of cutting salt out plus eating a diet like this,” he said. “You can reverse 30 years of aging in your blood vessels.”

While Americans have been bombarded with news of the Mediterranean cuisine’s healthfulness, Kochilas said, they don’t always know about the diet’s “indulgence factor.”

“It’s not a monastic cuisine,” Kochilas said. “It’s a cuisine that’s meant to be shared. It’s hearty, it’s user-friendly, and it’s convivial. And it’s simple food,” all factors she demonstrated later that night in her cooking class when she poured olive oil into a food processor — not from a measuring spoon, but straight from the jug.

Still, there are potential pitfalls to the diet’s success. Products increasingly are being marketed to consumers with Mediterranean buzzwords when they may be anything but authentic, Kochilas said. On a recent trip to the supermarket with her son, she noticed a processed cereal advertising that it was made with Greek yogurt.

“They had somehow found a way to completely bastardize this very traditional product, and turn it into something far away from what is actually beneficial,” she said.

Most Greek yogurt sold in America wouldn’t be recognizable to a Greek, Kochilas said. Traditional Greek yogurt is thickened by straining out the whey to leave protein solids, but most American manufacturers achieve that thickness by adding coagulants to the milk they use to make their yogurt. As a result, many American-made versions contain less protein and more sugar than true Greek yogurt.

Then there was the question of olive oil, which recent studies have shown provides more health benefits when it is unrefined. How can you tell the difference, a student asked, when most olive oils in American supermarkets aren’t labeled?

“You can feel it in your mouth,” Sacks said. “The more aroma and taste you have, the more unrefined it’s likely going to be.”

The events drew curious students and staff. Marissa Grenon, a Kirkland House junior who has done research and community work in nutrition while at Harvard, first developed an interest in cooking when she was diagnosed with celiac disease, a condition that prohibits her from eating gluten, at 14. Though she comes from an Irish family of “one-pot cooks,” she said, she “fell in love” with the nutritional benefits, the lower reliance on wheat, and the flavors of the Mediterranean diet.

While not everyone shares her intense interest in the subject, she thinks that the diet has the potential to catch on in a way that other diets touted by the medical community have not.

“I think when you can label something with a place that evokes beauty and history and give it that evocative power, that people will pay more attention,” Grenon said. “Things like ‘low-carb’ or ‘low-fat’ provoke this immediate sense of deprivation, whereas the Mediterranean diet makes you think, ‘Cool, I’m taking a culinary journey for lunch.’ ”