Giants behind, challenges ahead 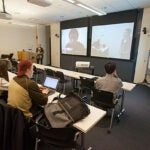 Melding the Web and the tactile

Smallpox is dead, polio is teetering, and life expectancies are way up, but on the other side of the ledger are new illnesses such as HIV and a global obesity epidemic that is spreading diabetes, heart disease, and other lifestyle-related ailments.

Faculty, students, and friends of the Harvard School of Public Health’s Department of Global Health and Population paused Thursday to appreciate 50 years of advances, the people who made them, and the challenges that lie ahead for those in the field today.

In each of its guises, the department’s faculty and students have focused their efforts on improving the condition of people around the world by tackling diseases that have caused human misery for millennia and working with global partners to strengthen health systems.

On April 25, 150-200 people turned out at HSPH’s Snyder Auditorium for an all-day 50th anniversary symposium. The event featured a panel of the School’s past deans, as well as discussions on the unfinished global health agenda, nutrition and global health priorities, strengthening health systems, and evaluating health and development.

Wafaie Fawzi, Richard Saltonstall Professor of Population Sciences, professor of nutrition, and the current department chair, and HSPH Dean Julio Frenk gave the welcoming remarks. Fawzi said the department, which has been holding 50th anniversary events all year, played a key role in developing the field of global health. He praised the worldwide scope of current faculty members’ work, while remembering those who preceded them: “It is important for us to know we follow in the footsteps of giants,” Fawzi said.

Frenk pointed out that anniversaries are important occasions on which to not only reflect on the past, but also refocus on the future. He pointed to the writings of Harvard Medical School’s first Professor of Tropical Medicine, Richard Pearson Strong, whose work predated the department. Frenk said that Strong’s work makes it clear that even then Harvard promoted values similar to those it cherishes today: partnership with global experts and local capacity-building.

The symposium included a video message from former HSPH Dean Harvey Fineberg, who led the School from 1985 to 1997, and the first panel featured three other HSPH deans — Frenk, Barry Bloom, who took the job from Fineberg, and Howard Hiatt, who led the school from 1972 to 1984 — as well as Harvard Medical School Dean Jeffrey Flier.

The field has seen a proliferation of organizations focused on global health. In 1963, there were just a handful, including the World Health Organization and UNICEF. Today there are thousands, many of them organized and run in their home countries, focused on an array of global health problems including tuberculosis, malaria, neglected diseases, and communicable and noncommunicable diseases. There has also been a major increase in funding, to $28 billion spent on global health problems today.

But even as global health officials plot the demise of infectious disease, starvation, and maternal mortality, the rise of lifestyle-related ailments from obesity are rapidly taking their place. Michelle Williams, Stephen B. Kay Family Professor of Public Health and chair of the HSPH Department of Epidemiology, said that noncommunicable diseases — heart disease, diabetes, cancer — are not tomorrow’s global problem, they’re today’s. Noncommunicable diseases account for 60 percent of deaths worldwide, and 80 percent of the cases are in lower- and middle-income countries.

Around the world, rising levels of tobacco use, unhealthy diets, and inactivity are contributing to the problem, Williams said. There are other unattended health issues as well, including violence against women and mental illness, with depression a leading cause of disability. In sub-Saharan Africa, for example, there is one psychiatrist for every 400,000 people.

Robert Black, Edgar Berman Professor of International Health at Johns Hopkins’ Bloomberg School of Public Health, sketched a daunting list of the work that remains to be done.

Despite the progress that has been made, each year sees 2.5 million new HIV infections, 8.7 million new cases of tuberculosis, 6.9 million child deaths, 165 million children stunted because of malnutrition, and 300,000 largely preventable maternal deaths — and in a global population projected to reach 9 billion by 2050 and with some 17 different tropical diseases still raging unchecked.

Much of those ills can be traced to a single cause, Black said: enduring and grinding poverty. About 1.4 billion people in the world live on less than $1.25 a day. Hunger and malnutrition are a significant underlying factor in the child deaths, weakening children and contributing to 45 percent of all child and infant deaths from infectious diseases.

Both the causes and cures for many of those ailments are known. The top three killers of children younger than 5 are pneumonia, diarrhea, and complications during pregnancy and childbirth, all of which are routinely treated and rarely fatal in Western nations. Because of this, Black said he is optimistic that conditions can improve dramatically — as long as there is the political will.