Engaging in a new community 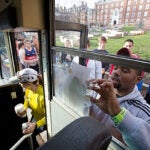 The innovative international scholar Tamar Herzog has been appointed the Monroe Gutman Professor of Latin American Affairs in Harvard University’s Faculty of Arts and Sciences (FAS). She also will become the Radcliffe Alumnae Professor at the Radcliffe Institute for Advanced Study. Herzog comes to Harvard from Stanford University, where she has been a professor of Latin American, Spanish, and Portuguese history since 2005.

Being “engaged in a community of scholars” is what brings Herzog, 48, to Harvard and its Radcliffe Institute. “I ask questions,” is how she characterizes her study of people and places in Latin America, Portugal, and Spain.

In the process of exploring borders, citizenship, communities, belonging, and belongings, her work connects with many areas of study. “In addition to the wonderful history department, it will be an opportunity to connect with scholars in the areas of law, anthropology, Latin American and American studies, art history, political science, literature, and philosophy,” she said.

“I am very pleased that a scholar of Tamar Herzog’s caliber has agreed to join the History Department,” said FAS Dean Michael D. Smith. “She will enrich the FAS community with her groundbreaking research, and represents an exciting opportunity for Harvard College students to learn from a world-renowned scholar.”

“Professor Herzog’s approach to finding answers to her questions by crossing disciplinary and geographical borders is the kind of wide-ranging intellectual pursuit the Radcliffe Institute is dedicated to supporting, and that Harvard encourages,” said Radcliffe Dean Lizabeth Cohen, who is also the Howard Mumford Jones Professor of American Studies in the same department that Herzog will join.

Herzog received her Ph.D. from École des Hautes Études en Sciences Sociales in Paris, and since then has conducted research in Spain, Portugal, Latin America, France, Germany, Israel, Italy, and the United Kingdom.  Her international experience and orientation is one reason she chose to join the Harvard faculty. For her, “the University offers a concentration and intensity of intellectual engagement that draws people from around the world.”

Herzog, who has previously been a fellow at the Institute for Advanced Study in Princeton and the European University Institute in Florence, Italy, and this year is a Guggenheim Fellow, recognizes the Radcliffe Professorship as “an exceptional opportunity.”

In her fellowship years, Herzog will pursue independent research in the institute’s stimulating community of artists and scholars. She expects that being a fellow will be perfectly timed as she determines the scope and nature of her next major project.

“The early stages are so crucial,” said Herzog, “and Radcliffe will be wonderful for that because there are so many different scholars, with different disciplines, and from different places who come together for intellectual exchange.”

Starting in the fall of 2013, Herzog will be welcomed to that “intellectual exchange” in an array of departments and schools across Harvard.