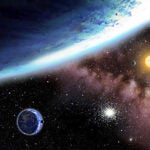 Our most pressing environmental challenge is not how many people the planet can support, but rather how many cellphone-toting, satellite-TV-watching, gas-guzzler driving members of the middle class it can bear.

That was the message from Sir David King, former science adviser to the British government, chancellor of the University of Liverpool, and director of research in physical chemistry at the University of Cambridge, who spoke at Harvard’s Science Center on April 17.

While global population growth has been important over the last century, as the number of humans climbed from 1.5 billion in 1900 to some 7 billion today, average female fertility has declined to the replacement value of 2.1 births, King said. While a significant increase of some 2 billion people is still expected as today’s children reach childbearing age, lifestyle changes are the greater challenge, he said.

The global middle class — defined as those who spend between $10 and $100 per day — has climbed rapidly, reaching 1 billion in 2000 and doubling to 2 billion just recently. The middle class is expected to reach 4.8 billion by 2050, raising the question of whether the planet has the resources to deliver the lifestyle people will expect.

“Improving Human Well-Being on a Resource-Limited Planet: Can We Do It?” was sponsored by the Harvard University Center for the Environment and was part of its “Future of Energy” lecture series. King was introduced by the center’s director, Daniel Schrag, Sturgis Hooper Professor of Geology and a professor of environmental science and engineering.

There are already signs the growing middle class is prompting increased competition for resources in global markets for oil, food, and minerals, King said. Fresh water sources are strained, including both surface water and aquifers. Some water-poor nations have turned to desalinating seawater, an energy-intensive process, with the energy often provided by coal.

In the most recent recession, commodity prices have stayed high, likely as a result of increased demand from the growing global middle class, largely in Asia and the Pacific, but increasingly in Africa as well, he said.

Oil prices’ response to supply and demand appears to have changed since 2005, King said. Prices spiked to $140 a barrel and have remained high despite the economic downturn, another sign of increased global demand. High oil prices have hurt the economies of Italy and Greece, he said, and are threatening Britain as its North Sea oil production declines.

The direct cost of imported oil in the United States, he said, is $1 trillion a year, but there are indirect costs — like the trillions spent on the Iraq War — that can be attributed to the need to maintain oil supplies.

“The impact of oil is massive,” King said. “The question is whether the economies of the world can operate at this price, $100 a barrel.”

In response to increased global demand for oil and sustained high prices for natural resources, nations can search for more supplies or they can change how they do business and embrace sustainable development. King said one of the biggest impediments to shifting to sustainable development is sheer inertia, fostered by existing infrastructure, government reassurances that business as usual can continue, and a public mindset that has people doing things the way they’ve always been done.

If that inertia can be overcome, a new focus on green industry could provide an economic boost to nations that have seen manufacturing jobs move overseas, King said. He gave several examples of innovative, sustainable technology, including a small, energy-efficient automobile built out of recycled plastic bottles and a blimp that can stay aloft for weeks to transport cargo and people and, if blanketed with solar panels, use little conventional fuel. He also cited the apparent success of a marine protected area off Cape Cod created as a solution to global overfishing, evidenced by the fact that 80 percent of the catch in that area is taken near the protected area’s boundary.

“Overfishing is a problem that is so manageable,” he said.

King held up Rwanda as a nation that is taking environmental concerns seriously. The nation, to which King is an adviser, has embraced green development and is seeking in-country ways to limit the amount of fuel it has to import, King said.

There are positive developments as well in China, one of the nations where the global growth in the middle class is occurring, King said. The country has added references to the environment to its constitution, and, in 2005, embarked on a major project to re-green the enormous Loess Plateau, a once-green area larger than Belgium that was denuded in ancient times by land-use practices.

“What we’re seeing is the biggest attempt at ecosystem recovery that the world has ever seen,” King said.