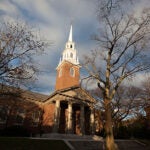 The Harvard University Police Department (HUPD) rolled out six new patrol cars in February. But it wasn’t the flashing lights or fresh paint jobs that were turning heads. It was the 47 mpg, gas-electric, hybrid motor under the hoods.

In a sign that environmental consciousness is becoming the norm across campus, HUPD is converting its entire fleet of marked patrol cars to hybrid and electric vehicles, in part to address growing concerns about climate change and public health. The move is expected to cut costs for the department by increasing the fleet’s fuel economy by a factor of 10. The switch also will dramatically reduce the amount of greenhouse gas pollution released into the air by HUPD vehicles.

“A core tenet of community policing is to be a responsible community partner, and one way we can do that is by taking steps to reduce our impact on the local environment,” said HUPD Chief Francis “Bud” Riley. “By moving to hybrid vehicles, we have also identified a reasonable solution to address community concerns about emissions, such as from idling, that will also save us money on fuel.”

Six new Ford Fusion hybrid patrol cars are replacing the oldest and least fuel-efficient cars in HUPD’s fleet (some of which have more than 100,000 miles on them). The Fusion was chosen based on research findings provided by the New York Police Department’s Fleet Services Division, which tracks the performance of vehicles used by the NYPD.

HUPD has also directed its officers to reduce idling when possible, and has already reduced its vehicle fleet by increasing walking and bicycling patrols.

One of the most visible changes will occur around Harvard Yard and on the Allston campus, where HUPD officers will use fully electric, three-wheeled vehicles to maintain public safety during regular patrols and special events. The smaller, more agile electric vehicles will increase visibility and allow officers to respond to emergencies more quickly than they would in standard cars.

The fleet conversion was funded by a Harvard Green Revolving Fund interest-free loan administered by the Office for Sustainability and Campus Services. The fund supports cost-effective, environmentally beneficial projects on campus. So far, the fund has loaned more than $16 million, supporting nearly 200 projects that have yielded more than $4 million in energy savings annually.

“It will take a full-scale change in the culture of how we work and live in order to implement Harvard’s aggressive sustainability goals,” said Heather Henriksen, director of the Office for Sustainability. “That means action from everyone, at every level of the University. And with this step, HUPD and Chief Riley have proven they are serious about being an active partner in our effort to combat climate change on campus.”

In 2008, Harvard set a goal to reduce greenhouse gas emissions 30 percent by 2016, including growth. The goal covers emissions from University-owned and operated vehicles, prompting efforts to green the fleet. Harvard began using biodiesel fuel for its shuttles and passenger vans in 2004, a practice that has been expanded to more than 50 service vehicles, from mail and dining services to solid waste and recycling. There are five hybrids in the campus services fleet, and landscaping services is expecting the delivery this spring of four new fully electric utility vehicles for use in the Yard.

Harvard’s Schools and administrative units are focused on improving public health and reducing the environmental footprint of campus operations through a wide range of initiatives, including totally organic landscaping and certified green cleaning services, community gardens and farmers markets, the Harvard On the Move fitness and wellness program, and local food purchasing and sustainable seafood initiatives in student dining halls.