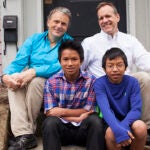 On Tax Day, a step toward equality

The Office for the Arts at Harvard (OFA) and the Council on the Arts at Harvard, a standing committee of the Faculty of Arts and Sciences, have announced the recipients of the annual undergraduate arts prizes for 2013. The awards, presented to over 100 undergraduates for the past 31 years, recognize outstanding accomplishments in the arts undertaken during a student’s time at Harvard.

Keir GoGwilt ’13 received the Louis Sudler Prize in the Arts. The prize recognizes outstanding artistic talent and achievement in the composition or performance of music, drama, dance, or the visual arts. This prize honors the sum of a student’s artistic activities at Harvard. A literature concentrator in Adams House, GoGwilt is awarded this prize in recognition of his exceptional and extensive work in violin performance. He is a member of the Brattle Street Chamber Players, and has performed with the Bach Society Orchestra and at ARTS FIRST. He has studied at the Taos Music School, the Mozarteum Summer Academy, and the Sarasota Music Festival, where he collaborated with Professor Robert Levin. He received a 2012 Artist Development Fellowship to study with teachers from the Köln Hochschule and the Guildhall School of Music. Additionally, he worked with American composer Tobias Picker on a recording for Tzadik records. At Bowdoin he served as a performing associate fellow and performed the Beethoven Concerto with the Bowdoin International Music Festival Orchestra. GoGwilt is collaborating with 2012 Louise Sudler Prize recipient Matt Aucoin ’12 and Victoria Crutchfield ’10 on a concert series at the Peabody Essex Museum, which brings together drama, poetry, and visual art in the space of musical performance. Along with the first program of this series in May, upcoming concerts include Vivaldi’s “Four Seasons” with the Bach Society Orchestra of Harvard and recitals at Miller Theater and the Canadian Opera Company in Toronto. Next year, he will continue performing while working with Benjamín Ramírez on extending the interdisciplinary implications of Ramírez’s scientific study of musicians’ technique.

Madelynne Hays ’13 and Oliver Luo ’13, recipients of the Council Prize in Visual Arts. The prize recognizes outstanding work in the field of visual arts. Hays, a history of art and architecture concentrator in Cabot House, is awarded this prize for her work in stage design. Her scenic design work has been featured in Farkas Hall, Agassiz Theatre, the Loeb Ex and the Loeb Mainstage including productions of “Sweeney Todd: The Demon Barber of Fleet Street,” “Next to Normal,” “House of Yes,” “Cain & Cain,” and “The Tempest and Talk Radio.” She received a 2012 Artist Development Fellowship, interning with Tony Award-winning Broadway set designer Derek McLane ‘80. Later this month her work can be seen in the production of “Closer” at the Loeb Ex, and the original student work “Of the Sorrows” at Arts@29 Garden Street. After graduation she plans to relocate to Australia and pursue a career in theater design.

A visual and environmental studies (VES) concentrator with a secondary field in physics and affiliate of Cabot House, Luo is awarded this prize for his work in animation. His work has been exhibited on campus at the Harvard Student Organization Center at Hilles Gallery, Harvard VES Monday Gallery, Annual CGIS Harvard Student Art Show, and also in the Harvard Museum of Natural History installation “Bizarre Animals 2.0” (2011). Luo has also served as a member of the design board of The Harvard Advocate.  His work was featured in the 2011 Boston Institute of Contemporary Art animation screening “New England Animators.” He is the recipient of a 2013 Artist Development Fellowship and will use his fellowship to study and work with professional animators and studios in Estonia and the Czech Republic and attend a traditional puppet animation workshop in Prague this summer.

Benjamin Moss ’13 is the recipient of the Radcliffe Doris Cohen Levi Prize. The prize recognizes a Harvard college student who combines talent and energy with outstanding enthusiasm for musical theater at Harvard and honors the memory of Doris Cohen Levi, Radcliffe ‘35.

A resident of Lowell House concentrating in English with a secondary in dramatic arts, Moss is awarded this prize for his work in musical theater productions both as an actor and composer. He has performed in “Grease” (Danny Zuko) and the Hasty Pudding Theatrical productions “Kashmir if you Can,” “There Will Be Flood,” and “There’s Something about Maui,” the last two of which he also served as composer. He has also served as music director for a production of “Little Shop of Horrors,” and acted as adviser to the 2012 production of “Spring Awakening” at Oberon. Moss is a former member of the Harvard Glee Club and in the summer of 2012 was a stage management and music intern for the American Repertory Theater’s summer workshop for their production of “Pippin” currently on Broadway. Before attending Harvard, Moss was a member of the first national tour of “Spring Awakening” performing the role of Ernst. Currently Moss is working on a two-woman musical scheduled to take place on the Adams Pool Theater during the upcoming ARTS FIRST festival (April 25-28).

Xi (CiCi) Yu ’13 is the recipient of the Louise Donovan Award. The award recognizes a Harvard student who has done outstanding work behind the scenes in the arts (e.g., as a producer, accompanist, set designer, or mentor and leader in the undergraduate arts world).

A psychology concentrator in Pforzheimer House, Yu is awarded this prize for her multi-faceted behind-the-scenes work. During her four years at Harvard, Yu has served as choreographer, stage manager, dance producer, lighting designer, and/or sound designer, for more than 30 productions and has served on the leadership boards of the Harvard-Radcliffe Modern Dance Company and Harvard CityStep. Yu has also designed posters and programs for various theatre and dance productions as well as the 60-page guide for Harvard’s annual ARTS FIRST Festival.

Irineo Cabreros ’13 and Shayna Skal ’13 received the Suzanne Farrell Dance Award. Named for the acclaimed dancer and former prima ballerina of New York City Ballet, the prize recognizes a Harvard undergraduate who has demonstrated outstanding artistry in the field of dance.

A Pforzheimer House resident enrolled in the Harvard/New England Conservatory joint five year A.B/M.M. program concentrating in physics and studying flute performance, Cabreros has served as both dancer and choreographer for the Harvard Radcliffe Dance Company. He has participated in the Liz Lerman Dance Exchange and Christopher Roman January Dance Intensives. In late March, Cabreros performed in the OFA Dance Program’s spring performance at Farkas Hall. A Dance Program emerging choreographer, his work will be featured in the “Emerging Choreographer Showings” at the Harvard Dance Center, April 18-19.

A physics concentrator with a secondary concentration in mathematics in Quincy House, Skal has been involved in numerous concerts produced by the OFA Dance Program and the Harvard Ballet Company. She has appeared in pieces choreographed by Dance Program Director Jill Johnson and visiting artists Christopher Roman and John Jasperse, and also performed in Counterpoint presented on the Loeb Mainstage by Harvard Radcliffe Dramatic Club in collaboration with the Harvard Ballet Company and the Harvard-Radcliffe Modern Dance Company. In addition, she has also collaborated with the Harvard Pops Orchestra and the Harvard Jazz Bands.

Eleanor Regan ’13 is the recipient of the Robert E. Levi Prize. This prize acknowledges a Harvard College senior who has demonstrated outstanding arts management skills over the course of an undergraduate career.  The recipient’s dedication, organizational talent and creative problem-solving, as well as ability to nurture artistry, have been critical factors in the success of one or more arts organizations and/or projects. The award honors the memory of Robert E. Levi, Harvard College class of 1933 and Harvard Business School, MBA, 1935.

A social studies concentrator in Adams House, Regan has stage managed or produced over ten undergraduate productions including “Macbeth,” “The House of Yes,” “CryHurtFood,” “Sweeney Todd: The Demon Barber of Fleet Street,” and “Equus.” Regan served as a teaching fellow for the Freshman Seminar “26y: Science, History and Theatre.” In addition, Regan has house managed for the American Repertory Theater and served as a programming intern at OBERON.

Emily Hyman ’13 is the recipient of the Jonathan Levy Award. This prize recognizes the most promising undergraduate actor at the College.

A literature concentrator with a secondary in dramatic arts residing in Pforzheimer House, Hyman has performed in over sixteen productions in venues across campus. Her roles have included Lady Macbeth in “Macbeth,” Emilia in “Othello,” the woman in “Cleansed,” and M in “Crave.” She appeared in the visiting directors projects “The Flies” and “Trust” on the Loeb Mainstage as well as the 2010 A.R.T./MXAT Institute production of Tennessee Williams’ “Stairs to the Roof” directed by 2005 Sudler Prize recipient Michael Donahue ’05. She will appear on the Loeb Mainstage in the HRDC production of “Sea Change” during the upcoming ARTS FIRST festival.

Matthew Warner, recipient of the Alan Symonds Award. The Alan Symonds Award, administered by the Office for the Arts and given by the Harvard-Radcliffe Gilbert & Sullivan Players in honor of Alan Symonds ’69-76, HRG&SP alumnus and former Technical Director for Harvard College Theatre, recognizes outstanding work in technical theater and commitment to mentoring fellow student technicians.

An English concentrator living in Quincy House, Warner ’13 has been involved as a designer for over 25 productions during his time at Harvard, including set designer for “The Mikado” and “Yeomen of the Guard” at Agassiz Theatre, as well as the Loeb Ex production of “You’re a Good Man Charlie Brown” (2012). Lighting design credits include the fall 2010 visiting director project “Trust” on the Loeb Mainstage, and Harvard Early Music Society’s fall 2010 production of “Les Plaisirs de la Paix.” From 2010-12 Warner served on the executive board of the Harvard College Stage Designers’ Collective as studio coordinator and also as secretary and vice president of the board of directors for Harvard-Radcliffe Gilbert and Sullivan Players.

The OFA supports student engagement in the arts and integrates the arts into University life. Through its programs and services, the OFA teaches and mentors, fosters student art making, connects students to accomplished artists, commissions new work, and partners with local, national, and international constituencies. By supporting the development of students as artists and cultural stewards, the OFA works to enrich society and shape communities in which the arts are a vital part of life. For more information about the OFA, call 617.495.8676, or visit www.ofa.fas.harvard.edu.