When timing is everything 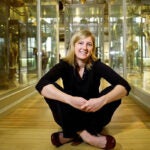 When it comes to the sort of beneficial mutations that drive natural selection, there’s new evidence that, evolutionarily speaking, timing is everything.

In paper published in the March issue of Genetics, Christopher Marx, associate professor of organismic and evolutionary biology, says that beneficial mutations may occur more often than first thought, but many never emerge as “winners,” because they don’t fall within the narrow set of circumstances required for them to dominate a population.

“Remarkably, it’s just not that hard to improve. But the trick is that it’s not good enough to just be good,” Marx said. “Any particular mutation being a winner is unlikely because it has a number of battles to face to avoid being wiped out. It’s pretty cutthroat.”

Interestingly, Marx hadn’t set out to study these intra-population struggles.

His original goal was to study how Methylobacterium extorquens, a bacterium known for eating methanol and excreting formaldehyde, developed its unusual behavior. To examine that question, Marx began by genetically altering the bacteria to replace the normal metabolic pathway with a new one.

The foreign pathway, however, put too much strain on the organisms, forcing them to evolve ways of reducing that burden, including by decreasing the expression of the new genetic pathway or by reducing the number of copies of the new genes.

It was the third strategy, however, that caught Marx’s attention. To insert the new metabolic machinery into the bacteria, he expressed them from a plasmid — a sort of free-floating chromosome — that is present in 10 copies for each bacterial cell. In some cases, the beneficial mutations occurred by recombining this introduced plasmid into the bacterium’s normal chromosomes, thereby essentially co-opting the new genetic material into its own.

“This happens in nature all the time. Genes get passed around on plasmids like this,” Marx said. “In the long term, if you’re going to stick around, you can’t be standing in the foyer with your coat on, you have to get into the house. You have to get into the chromosome if you’re going to remain for a longer period of time, and we actually saw it happen.” In fact, Marx said, researchers saw the mutation occur many times, in multiple strains of bacteria.

In one case, he said, the mutation occurred 17 times in the same population, yet none of these ever went on to dominate the population. Of the eight populations examined in the paper, the type of mutation that brought the plasmid into the chromosome emerged as the most successful evolutionary strategy only three times.

Though the mutation resulted in as much as a 20 percent increase in fitness, Marx said it simply wasn’t enough in some cases.

“The fact that this mutation happened was not good enough; these populations were improving so fast due to so many other large-benefit mutations” Marx said. “In some populations, they managed to emerge early on. In others, they occurred later. Either way, there were always multiple similar mutations of this sort rising together in a single wave.”

The results, Marx said, highlight the fact that while beneficial mutations may be more common than previously believed, they must occur within a limited window of opportunity to become successful.

“This strategy is only one of several ways of turning down the expression of those genes,” Marx explained. “Once you fix that problem, it’s no longer an issue. In some of these other strains, the bacteria used another mutation to turn down that expression, so it wouldn’t benefit from integrating the plasmid into the chromosome. Usually, another type of mutation turning down this foreign pathway won out.”

Ultimately, Marx said, the research casts important new light on the process of natural selection by demonstrating that the sorts of mutations that were once thought to be relatively rare may happen quite often. On the other hand, they can be simply wiped out by other evolutionary forces.

“We have a poor idea of how many things were good enough to get a start, but never got far enough to win,” Marx said. “There could easily be hundreds, or even thousands, of beneficial mutations that can occur in a population of a billion bacteria in less than a tablespoon of liquid, but we only tend to find the one eventual winner. Because of the unusual nature of this type of mutation, it became easy for us to find them, distinguish independent events that occurred in the same population, and thus understand that these mutations are more common than we thought.”