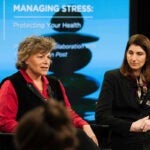 An analysis of data from the Framingham Offspring Study — a long-term study that follows children of participants in the original Framingham Heart Study — may have answered a question that has troubled individuals considering stopping smoking: Do the health effects of any weight gained after quitting outweigh the known cardiovascular benefits of smoking cessation? The report in the March 13 issue of JAMA concludes that the benefits of stopping smoking far exceed the risks from any associated weight gain.

“Among people without diabetes, those who stopped smoking had a 50 percent reduction in the risk for heart attack, stroke, or cardiovascular death, and accounting for any weight increase didn’t change that risk reduction,” said Harvard Medical School Associate Professor of Medicine James Meigs of the General Medicine Unit at Massachusetts General Hospital (MGH).

“In patients with diabetes — among whom weight gain is a particular concern — we saw the same pattern of a large risk reduction regardless of weight gained,” noted Meigs, the senior author of the JAMA report.

No study has previously investigated whether weight gain associated with smoking cessation increases the risk of cardiovascular disease. One did look at the effects on risk factors such as blood pressure and lipid levels, but none have analyzed the actual occurrence of cardiovascular events. Participants in the Framingham Offspring Study, which began in 1971, undergo a comprehensive medical exam and history every four to six years.  The current investigation analyzed data from participant visits conducted from the mid-1980s into the mid-2000s, which covered the third to eighth visits for the overall study.  The number of participants at each exam cycle ranged from almost 2,400 to about 3,250, for a total of 11,148 individual person-exams.

Based on information gathered at each exam, participants were categorized as never smokers, current smokers, recent quitters — people who had stopped smoking since their last exam — and long-term quitters. At the third study visit, 31 percent of participants were current smokers, and by the eighth visit only 13 percent continued to smoke. A general trend toward weight gain was seen across all study participants.  Smokers, never smokers, and long-term quitters gained an average of 1 to 2 pounds between study visits, while recent quitters gained an average of 5 to 10 pounds. But no matter how much weight they gained, the risk of cardiovascular events in the six years after quitting dropped in half for participants without diabetes. (A similar drop in the incidence of cardiovascular events was seen in participants with diabetes but did not reach statistical significance, probably because less than 15 percent of the overall group was known to have diabetes.)

“We now can say without question that stopping smoking has a very positive effect on cardiovascular risk for patients with and without diabetes, even if they experience the moderate weight gain seen in this study, which matches post-cessation weight increase reported in other studies,” said Meigs.