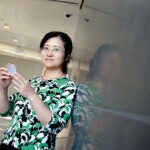 Previous studies have shown that keeping the mind active, exercising, and social interactions may help delay the onset of dementia in Alzheimer’s patients.

Now, a new study led by Dennis Selkoe, co-director of the Center for Neurologic Diseases in the Department of Neurology at Brigham and Women’s Hospital (BWH), provides specific, pre-clinical scientific evidence supporting the concept that prolonged and intensive stimulation by an enriched environment — especially regular exposure to new activities — may have beneficial effects in delaying one of the key negative factors in Alzheimer’s disease.

Researchers at the Harvard-affiliated BWH used a wild-type mouse model when evaluating how the environment might affect Alzheimer’s. Unlike other pre-clinical models used in Alzheimer’s disease research, wild-type mice tend to more closely mimic the scenario of average humans developing the disease under normal environmental conditions, rather than being strongly genetically pre-disposed to the disease.

Harvard Medical School Assistant Professor of Neurology at BWH Shaomin Li was the first author on the study, which will be published online today in Neuron.

Alzheimer’s disease occurs when amyloid beta protein accumulates and forms “senile plaques” in the brain. This protein accumulation can block nerve cells in the brain from properly communicating with one another. This may gradually lead to an erosion of a person’s mental processes, such as memory, attention, and the ability to learn, understand, and process information.

Selkoe and his team found that prolonged exposure to an enriched environment activated certain adrenalin-related brain receptors. The activity triggered a signaling pathway that prevented the amyloid beta protein from weakening the communication between nerve cells in the brain’s “memory center,” the hippocampus. The hippocampus plays an important role in both short- and long-term memory.

The ability of an enriched, novel environment to prevent amyloid beta protein from affecting the signaling strength and communication between nerve cells was seen in both young and middle-aged wild-type mice.

“This part of our work suggests that prolonged exposure to a richer, more novel environment beginning even in middle age might help protect the hippocampus from the bad effects of amyloid beta, which builds up to toxic levels in 100 percent of Alzheimer patients,” said Selkoe, Vincent and Stella Coates Professor of Neurologic Diseases in the Department of Neurology at Harvard Medical School, the study’s senior author.

Moreover, the scientists found that exposing the brain to novel activities in particular provided greater protection against Alzheimer’s disease than did just aerobic exercise. According to the researchers, this observation may be due to stimulation that occurred not only physically, but also mentally, when the mice moved quickly from one novel object to another.

“This work helps provide a molecular mechanism for why a richer environment can help lessen the memory-eroding effects of the build-up of amyloid beta protein with age,” said Selkoe. “They point to basic scientific reasons for the apparent lessening of [Alzheimer’s disease] risk in people with cognitively richer and more complex experiences during life.”