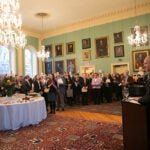 If not for a high school class in psychology, Professor Matthew Nock, a 2011 recipient of the MacArthur “genius” grant, might have traveled a very different path.

The New Jersey native grew up working alongside his father and two brothers in his father’s auto garage. It wasn’t until Nock attended Boston University, becoming the first college graduate in his family, that he learned about careers in science and academia. “I was instantly hooked,” said Nock, who went on to complete his Ph.D. in psychology at Yale University.

But academic degrees aside, some familial roots remain grounded in Nock’s life, and his Harley-Davidson Sportster 1200 Custom motorcycle is proof of that. “My dad has two Harleys, both of my brothers have Harleys … it’s sort of just what you did,” he said, smiling.

The admission that he owns a Harley surprised the 20 students who were chosen by lottery to join Nock and Harvard College Dean Evelynn M. Hammonds at her house for a “fireside chat.” The event was the second in a new series meant to connect undergraduates with faculty members in an open, informal, and welcoming atmosphere.

“I really enjoyed it,” said Jayshlyn Acevedo ’14. “To go to Dean Hammonds’ house and just have an intellectual conversation was great. I have a midterm tomorrow, but I wanted to make time for this, and it really was time well spent.”

When Hammonds asked Nock how he chose his focus — suicide prediction and prevention — he said he had always been curious about what made people give in to their darker impulses.

“I was curious as to why people lose control,” he said. “Impulsive and aggressive behavior was fascinating to me. Why do people do things they shouldn’t do?”

During an undergraduate semester abroad program in London, Nock found himself in an unusual setting for an internship: the ward of a British psychiatric hospital, with several violent and suicidal patients.“I got the chance to be locked in a room — not much larger than this, actually,” he said, gesturing at Hammonds’ living room, “with lots of people who had done violent things to others, and serious injury to themselves.

“I was so intrigued. I asked the staff what they were going to do for those patients, treatment-wise, and they said they didn’t know. They had no idea what to do to stop people from hurting themselves.”

At the time, Nock said, he wanted to be a practicing clinician. But as he began researching self-injury, suicide, and violence, he realized the dearth of knowledge about why people made those decisions, and his path shifted again.

Nock’s long-term goal is to vastly improve the ways in which suicide is predicted, and prevented. “Suicide is the 10th-leading cause of death in the U.S.,” he said. “Five times as many people die by suicide as by HIV/AIDS every year in the U.S., more than twice as many people die by suicide than by homicide. It’s a leading cause of death — and no one’s really talking about it, relatively few people are studying it, and we’re not yet good at predicting or preventing it.”

Currently, Nock’s lab is working on ways to predict whether a person is at risk for suicide. Developing tests that can predict a person’s likelihood of attempting suicide through scientific inquiry — akin to the medical tests given to patients in emergency rooms, rather than posing questions to the individual for psychological assessment — may be the best solution for identifying individuals who need help.

Asked whether research can provide assistance or answers for survivors of suicide, a term for family members and friends who have lost a loved one, Nock said that research is beginning to delve into their experiences as well.

“We’re actually looking at suicide in the U.S. Army, because suicide among soldiers has skyrocketed in the last decade,” he said. “We’re interviewing members of their family and immediate supervisors, asking them about the person who died by suicide, but also the effect on them, how they’re dealing with the death … what happens after people die by suicide.

“There’s not a lot of research yet. But there are support groups, such as the American Foundation for Suicide Prevention, which has a national network of survivor support groups, and that can be very helpful.”

As the evening drew to a close, both Hammonds and Nock took the opportunity to encourage the students to reach out to faculty members on campus by visiting them during office hours and engaging them in conversation.

“That’s part of why we’re here,” Hammonds agreed, adding that her office hours are posted on her website. “Our students are some of the smartest folks in the world, and we want to talk to you.”

Nock confirmed that for him, one of the joys of working at Harvard is connecting with its students.

“I feel really fortunate to be here at Harvard, because our students are so engaged, interested, and passionate about learning,” Nock said. “Once I got into school, I never really wanted to get out, because I love learning, and now also love teaching. Those interactions with students, that exchange of information, is very rewarding to me.”

“Having students leave the event asking [Hammonds and Nock] for their office hours, wanting to even engage them further, was great,” he said. “Going to Dean Hammonds’ house and engaging with an esteemed faculty member is one of the most Harvard-type of things you can do. It was amazing, and I had a wonderful time.”