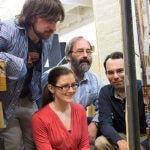 Katherine Wyman of the Harvard-Smithsonian Center for Astrophysics (CfA), began her Thursday night discussion, “Dark Cloud Encounters,” by recalling a 2003 episode of the revived “Twilight Zone” television series called “Sunrise,” during which the sun was blocked by a dark cloud, devastating the Earth’s climate.

Such “clouds of gas and dust between stars” do exist, Wyman told a packed Phillips Auditorium, and they do indeed have the potential to alter the climate. Wyman spoke as part of the CfA’s observatory nights, which invite the general public to hear about topics in astrophysics every third Thursday of the month.

Wyman has studied these “dark clouds” between stars (which Wyman also termed interstellar medium or “ISM”) to learn how far away they are from Earth, as well as “how fast the clouds are moving, their temperature, and their density.” Conducting research using the massive Harlan J. Smith Telescope (“it’s larger than the Hubble Space Telescope,” Wyman noted) at the Texas-based McDonald Observatory, Wyman meticulously observed how some of these dark clouds blocked the light coming from particular stars.

Wyman explained that the star called the sun gives off gas, wind, and particles, creating a “bubble” called the heliosphere. The heliosphere is dynamic, she said. “It can get bigger or smaller” depending on the density of the ISM surrounding it. The heliosphere shrinks with increases in density, something that the dark clouds can cause.

So what’s the connection between dark clouds and the Earth’s climate? Well, said Wyman, that centers on cosmic rays, which she described as “high-energy particles moving throughout the universe at almost the speed of light.” If not blocked, these cosmic rays might “mean more global cooling because they could mean increased cloud formation,” she said, and also “alter atmospheric chemistry,” and even “seed lightning strikes.” The heliosphere serves as a shield by diverting cosmic rays, while the Earth’s atmosphere and magnetic field offer a similar shielding function, Wyman explained.

Since high-density dark clouds shrink the heliosphere, they also work to reduce the Earth’s protective shield against cosmic rays, which would spell many changes for Earth’s climate and its inhabitants, Wyman noted. While the mechanism that Wyman describes is complex, akin to the many moving, interactive parts in a Rube Goldberg device, it’s highly relevant for this climate. “This is astronomy that focuses on the ground, that [potentially] impacts us all,” she said.

When an audience member asked Wyman about other potential consequences of a shrinking heliosphere, she quipped there could be “lots of space dust falling to the surface of planets; things could get much dustier,” which drew chuckles from the audience.

David Aguilar, CfA’s director of public affairs, who had introduced Wyman, ended the evening by addressing the audience with something brighter than dark clouds: “Astronomy can be very technical, with lots of numbers and graphs,” he said, “but there’s a wonderment to it that speaks to us at a human level.” To understand this wonderment, Aguilar explained, “all it takes is getting up in the morning and looking up” at the sky.

Aguilar ended the session with a short film of the moon rising slowly against the sonic background of a symphony.