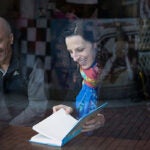 In a breakthrough that could one day yield important clues about the nature of matter itself, a team of Harvard scientists has measured the magnetic charge of single particles of matter and antimatter with unprecedented precision.

As described in a March 25 paper in Physical Review Letters, the team — led by Gerald Gabrielse, the George Vasmer Leverett Professor of Physics, and including postdoctoral fellows Stephan Ettenauer  and Eric Tardiff and graduate students Jack DiSciacca, Mason Marshall, Kathryn Marable, and Rita Kalra — was able to capture individual protons and antiprotons in a “trap” created by electric and magnetic fields. By tracking the oscillations of each particle, the team was able to measure the magnetism of a proton 1,000 times more accurately than any proton had been measured before. Similar tests with antiprotons produced a 680-fold increase in accuracy in the size of the magnet in an antiproton.

“That is a spectacular jump in precision for any fundamental quality,” Gabrielse said. “That’s a leap that we don’t often see in physics, at least not in a single step.”

Such measurements, Gabrielse said, could one day help scientists answer a question that might seem more suited for the philosophy classroom than the physics lab: Why are we here?

Making precise measurements of protons and antiprotons, Gabrielse explained, could begin to answer those questions, by potentially shedding light on whether the CPT (charge conjugation, parity transformation, time reversal) theorem is correct. An outgrowth of the standard model of particle physics, CPT states that the protons and antiprotons should be virtually identical — with the same magnitude of charge and mass — yet with opposite charges.

The predictions of CPT have been verified by experiments measuring the charge-to-mass ratio of protons and antiprotons, but further investigation is needed, Gabrielse said, because the standard model does not account for all forces in the universe.

“What we wanted to do with these experiments was to say, ‘Let’s take a simple system — a single proton and a single antiproton — and let’s compare their predicted relationships, and see if our predictions are correct,’” Gabrielse said. “Ultimately, whatever we learn might give us some insight into how to explain this mystery.”

While researchers were able to capture and measure protons with relative ease, antiprotons are only produced by high-energy collisions that take place at the extensive tunnels of the CERN laboratory in Geneva, which created a dilemma.

“Last year, we published a report showing that we could measure a proton much more accurately than ever before,” Gabrielse said. “Once we had done that, however, we had to make a decision. Did we want to take the risk of moving our people and our entire apparatus — crates and crates of electronics and a very delicate trap apparatus — to CERN and try to do the same thing with antiprotons?  Antiprotons would only be available till mid-December and then not again for a year and a half.

“We decided to give it a shot, and by George, we pulled it off,” he continued. “Ultimately, we argued that we should attempt it, because even if we failed, that failure would teach us something.” In what Gabrielse described as a “gutsy” choice, DiSciacca agreed to use the attempt to conclude his thesis research, and new grad students Marshall and Marable signed on to help.

Though the results still fit within the predictions made by the standard model, more accurate measurements of the characteristics of matter and antimatter may advance our understanding of how the universe works.

“What’s also very exciting about this breakthrough is that it now prepares us to continue down this road,” Gabrielse said. “I’m confident that, given this start, we’re going to be able to increase the accuracy of these measurements by another factor of 1,000, or even 10,000.”