Senegal as a starting point 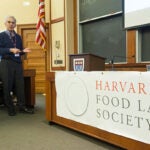 With a New England winter storm as an ironic counterpoint, a delegation of Senegalese officials arrived at the Harvard Kennedy School’s Institute of Politics Friday. In the lead was Macky Sall, who is only the fourth president of the Republic of Senegal since the nation was founded in 1960. The country of 12 million is at the westernmost edge of Africa, where March temperatures hover around 80 degrees.

Speaking mostly in French, with part of the audience listening on portable translation devices, Sall drew a picture of a nation close in values to the United States, and of a continent on the verge of power and prosperity. “Africa is the continent of the future,” he said — young and rich in resources.

At the same time, he acknowledged the economic, political, and demographic challenges ahead. In Senegal, for example, per capita income is $2,000 a year, adult literacy is around 40 percent, and fertility rates threaten to overtake resources. Senegalese women, on average, have five children each.

Sall’s talk coincided with International Women’s Day, which he marked by touting parity laws in Senegal that require political parties to field an equal number of male and female candidates. He also cited Senegal’s cash-transfer program as something that will especially benefit women, “the half that give life to the other half.”

The cash-transfer program is part of what Sall described as “a Senegalese New Deal, so nobody is left behind.” Fair taxation is another part of the plan, he said, along with universal health coverage — a mention that earned a burst of applause.

That New Deal will address the necessity of social justice, without which there is no “peace and stability,” and without which there is only the familiar spiral into unemployment and poverty. Paraphrasing John F. Kennedy, Sall said: “If a free society cannot help the many who are poor, it cannot save the few who are rich.”

Protection for all means “peace and stability,” he said — a fundamental requirement for improving the economy. “Senegal aspires to be a middle-income country,” said Sall, who envisions his nation an economic “African tiger.”

All of Africa could be that tiger, he said, as long as three issues are addressed: social justice, health care, and — before all — improved governance. “Sovereignty is the people’s,” he said.

In that respect, Senegal is a step ahead of most of the continent, he said, using his own election last year as an example. The contest — preceded by divisions that led Sall to start his own political party — was settled in a peaceful runoff. (Sall netted 65 percent of the vote against the incumbent president, Abdoulaye Wade.) “My opponent gracefully conceded on election night,” said Sall, “just as it would happen here in the United States.” (In the fall of 2007, Wade — then 81 — made a visit to Harvard Kennedy School, hailing an “African renaissance.”)

Senegal is also bolstered by its sense of national identity, “the belief that we all belong to one nation,” Sall said, despite an uneven divide in religious practice. (The country is 95 percent Muslim, 5 percent Christian.)

Good governance in Senegal is also institutionalized, through a special ministry, new laws, and a presidential will to provide what is necessary: the rule of law, transparency in public affairs, recovery of “illegally acquired public assets,” and a challenge to a sense of impunity among public officials, Sall said — making honesty “an ethical and democratic requirement.”

But that is one country. Stronger democracies alone are not enough for Africa to become “the next frontier, after Asia.” Needed too are continental infrastructure improvements — roads and rails to bind its nations into a powerful economic whole. A Marshall Plan for Africa, Sall said.

Infrastructure will be at the top of Sall’s agenda when he meets with President Obama at the White House this month. Also at the top will be Mali, Senegal’s neighbor to the east, and now the locus of unrest over terrorist activity. Incursions of terrorist powers, he said, are unacceptable in sovereign nations.

The IOP venue was crowded with Francophone Africans. Only two questions of nearly 20 were asked in English.

It was to this Senegalese audience — young students and professionals, largely — that Sall issued his only plea: “Go back and save your country,” he said, despite lower salaries and rougher conditions. “Let your goodness blossom.”

And for those staying behind: Be ambassadors. African “values are not very known sometimes,” and stereotypes abide, said Sall — but “Africa is the birthplace of humanity, and still has a lot to offer humanity.”