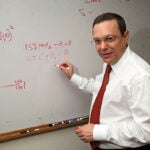 A learner’s guide to the universe

Authors Emily Bazelon and R.J. Palacio on Monday joined Richard Weissbourd, director of the Human Development and Psychology Program at the Harvard Graduate School of Education (HGSE), at Longfellow Hall to trade ideas about ending bullying at U.S. schools.

Most children aren’t bullies, and the incidents of bullying are fairly infrequent, the speakers agreed. Still, the problem is on the rise, and increasingly tied to short- and long-term emotional consequences.

“I think that we do have a real problem if we define it properly,” said Bazelon, a senior editor for Slate and author of “Sticks and Stones: Defeating the Culture of Bullying and Rediscovering the Power of Character and Empathy.” “To me the definition of bullying that makes the most sense is to think of it as verbal or physical harassment that repeats over time and involves a power imbalance.”

That harassment has gained disturbing traction with the growth of the Internet. The pain of students hounded in schoolyards, on buses, and in classrooms has intensified as bullies have used social media sites such as Twitter and Facebook to extend their reach.

But social media outlets, while part of the problem, can also be an important part of the solution. Facebook is poised to make a difference, said Bazelon, who cited the company’s move to punish users who break their bullying rules with a group page by not letting them create another group page for a month.

“Ninety-four percent of the kids who get those messages don’t reoffend,” said Bazelon, citing an internal study.

Social media companies “actually have a lot of influence, but in order to use it, they have to decide they are OK enforcing social norms,” she said. “And what they really want is for people to enforce their own norms on Facebook. And that sounds like a good idea, but the problem is how is that going to happen?”

The idea of standing up to bullies might have a lot of appeal, but to act can prove difficult, as Bazelon illustrated through personal experience, describing how she was bullied on the train when she attempted to stop a group of teens from harassing an older man.

“I told the kids to stop and they totally turned on me. They yelled at me in the car. I got off, they got off with me. They followed me off the platform, up the escalator into Union Station, yelling at me the whole way. And I was so uncomfortable. … That experience reminded me that this whole idea that you are supposed to confront a bully in the moment, someone who is more powerful, probably bigger than you, and is being really aggressive, that is a tough thing to ask.”

She pointed to the findings of a researcher and longtime guidance counselor in Maine who argues that “instead of standing up to bullies, we need to help kids stand with victims.”

“That suggests to me that we need to give kids a variety of strategies that are actually realistic for them.”

The panelists agreed that discouraging bullying requires a variety of strategies, and a commitment from teachers, school administrators, and students. But parents can play the most pivotal role by helping their children place an emphasis on empathy and character building, they said.

Weissbourd, who pushed for parents to cultivate a strong sense of morality in their children in his 2009 book, “The Parents We Mean to Be,” said an important part of the solution involves creating social norms where kids “don’t feel powerful degrading other kids — they feel powerful including other kids.”

“We have to help kids value other people,” he added, “and we also help them value people who are different from them.”

The novel, published last year, “is not a really book about bullying,” said Palacio. “It’s a book about what I hoped would be the antithesis to bullying, which is about spreading empathy. … Empathy is something that is very difficult to teach, but it is something that can be inspired in children.”

Anti-bullying programs are on the rise in U.S. schools. Forty-six states now have anti-bullying laws, according to the Department of Education, which hosted the first summit on bullying prevention in 2010. The federal government has also developed its own website devoted to the issue, stopbullying.gov, managed by the Department of Health and Human Services.

Celebrities have joined the conversation. Pop sensation Lady Gaga launched her Born This Way Foundation at Harvard last February during an HGSE-sponsored discussion at Sanders Theatre that drew an influential list of voices against bullying, including Oprah Winfrey and U.S. Secretary of Health and Human Services Kathleen Sebelius.

The singer said she hoped her initiative, a collaboration with Harvard’s Berkman Center for Internet & Society, would provide “a transformative change in culture over time.”

Shortly after Gaga launched her foundation, Dean Kathleen McCartney of HGSE and Weissbourd backed the effort in a CNN article.

“Bullying is not a rite of passage,” they wrote, “it is a human rights issue.”